You are here: Home / All Recipes / Boo Berry Halloween Pie with Blackberries, Blueberries, and Raspberries 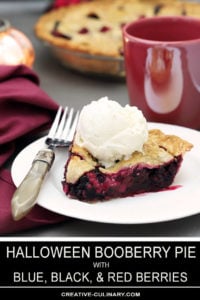 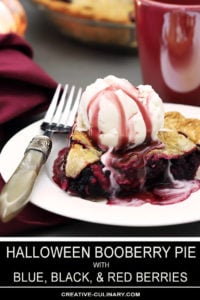 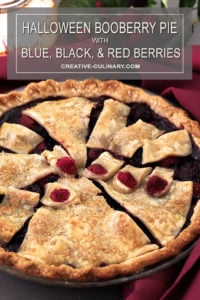 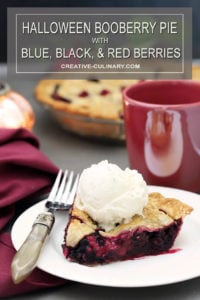 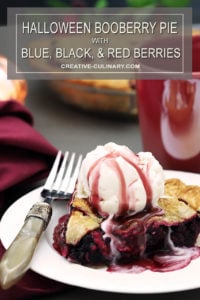 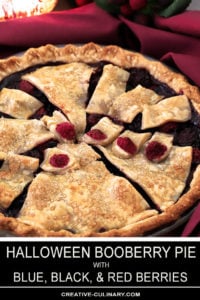 A simple revision to the top crust of a great mixed berry pie results in this Boo Berry Halloween Pie; all it takes is the erratic placement of a top crust and the addition of pastry and berry ‘fingers’ to achieve this slightly spooky but totally delicious pie. 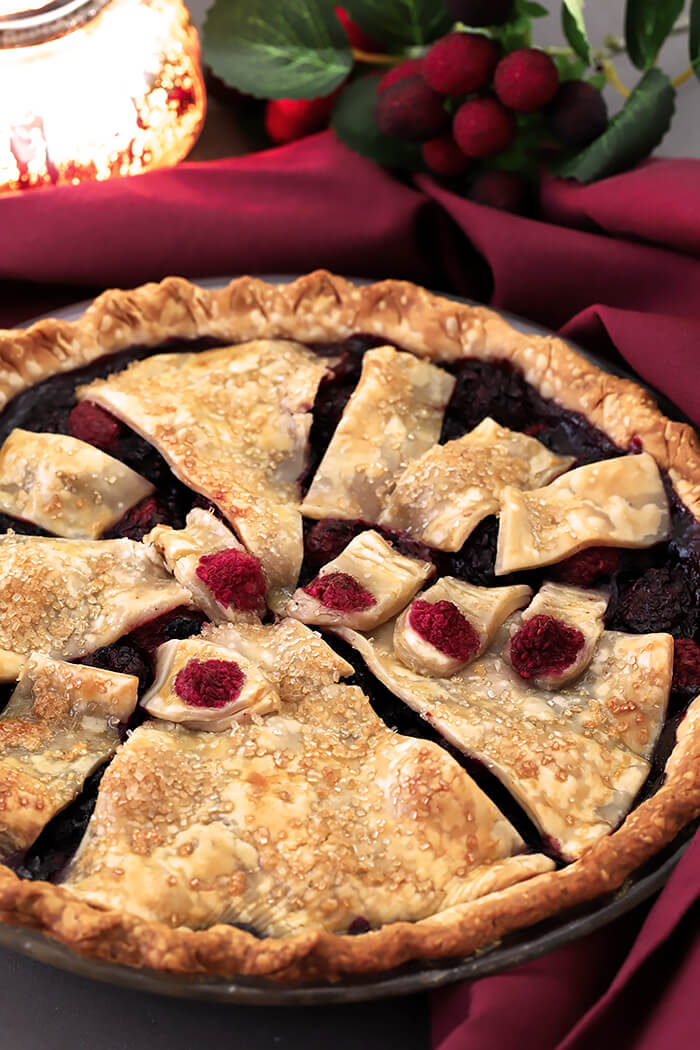 If you’ve read this blog long enough, you know I’ve probably lamented (way too much!) that Halloween is not my favorite holiday. I’ve always been keen on making cocktails for the season, but foods, not so much. Both of my previous food efforts fall into the ‘cute’ range, these Mummy Cupcakes and Ghost Cookies.

For me, nothing comes close to Christmas except maybe a Thanksgiving with a house full of friends and family. So what’s with this Boo Berry Halloween Pie, especially one so late to the blog before a holiday? 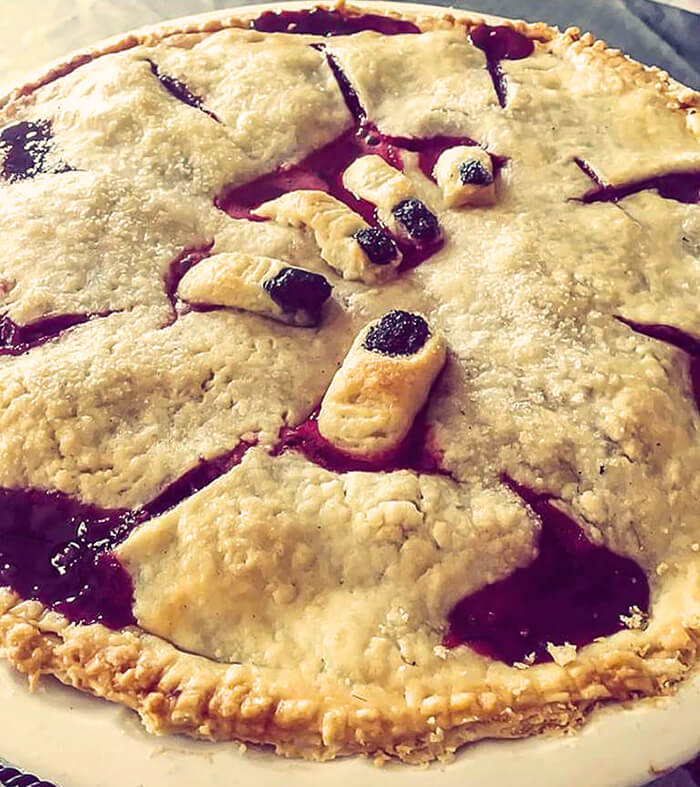 Well, I’ll tell you! I saw this photo of a pie last year and I remember grinning. I thought it was sort of ‘cute’ and though it was just this image going around and it wasn’t part of a blog post with a recipe, it seemed like it would be easy enough to replicate so I saved that photo on my desktop. If anyone knows the original photographer, I would love to credit them!

Of course I totally forgot about it until I noticed it on Sunday. Drat…not much time but I got on it!

I have my groceries delivered so when I really need to make sure I get an ingredient I might overdo my purchases as a guarantee I’ll get something I can use. This time around I bought blueberries, blackberries, and raspberries hoping to get enough to make a fruit pie. Son of a gun…of course I got all three without a hitch! So this became a mixed berry pie but in acquiescence to the season, the appropriately named ‘Boo Berry Pie for Halloween’ even if the pie itself would be great all year round. 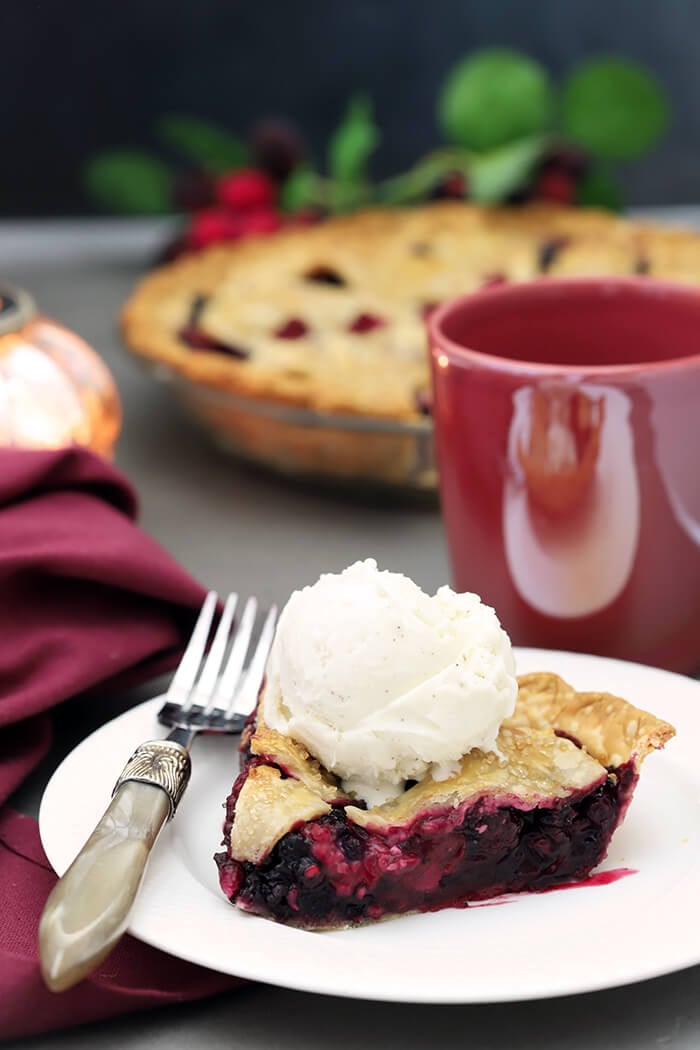 I’ll be honest…I want to do this again…you know, practice makes perfect and all? I had started to cut the top crust into different size lattice strips and didn’t love that so my top crust had to include some of those pieces. But seriously…as long as most of the top is covered and the pastry/berry fingers are positioned fairly well, it looks fine. Simple, not gory or really scary and with all those berries, a really scrumptious Boo Berry Halloween Pie. That’s the best part!

Easy too. Mostly because I am not a pie dough purist. I’m sort of a ‘sometimes purist.’ When I make a homemade dough, I have to make it with lard and butter, there is none better. I have some lard in my freezer too…but the time element meant I would have to thaw it, make the dough, refrigerate it for a good period of time, all before I could even start on assembly and I was down to the wire.

So what I will do without remorse or one bit of guilt, I used some prepared Pillsbury Refrigerated Pie Crusts. I always have a couple of those on hand for last minute pies. Truth be told, even if I had made the bottom crust from scratch, I would have probably used the Pillsbury for the top, my from scratch dough really requires it go into the oven cold. Making a swamp and fingers? Nope, that would not have happened.

Not that this is hard but there is some measuring and finagling as you press together two pieces of dough to get the ‘fingers’ thick enough, cut the pieces, use a knife to made some slice impressions for knuckles, and then create a depression for the red berry ‘fingernail.’ Especially first time out of the chute. Pillsbury’s dough holds up much better for that purpose so I just made the whole pie with it. 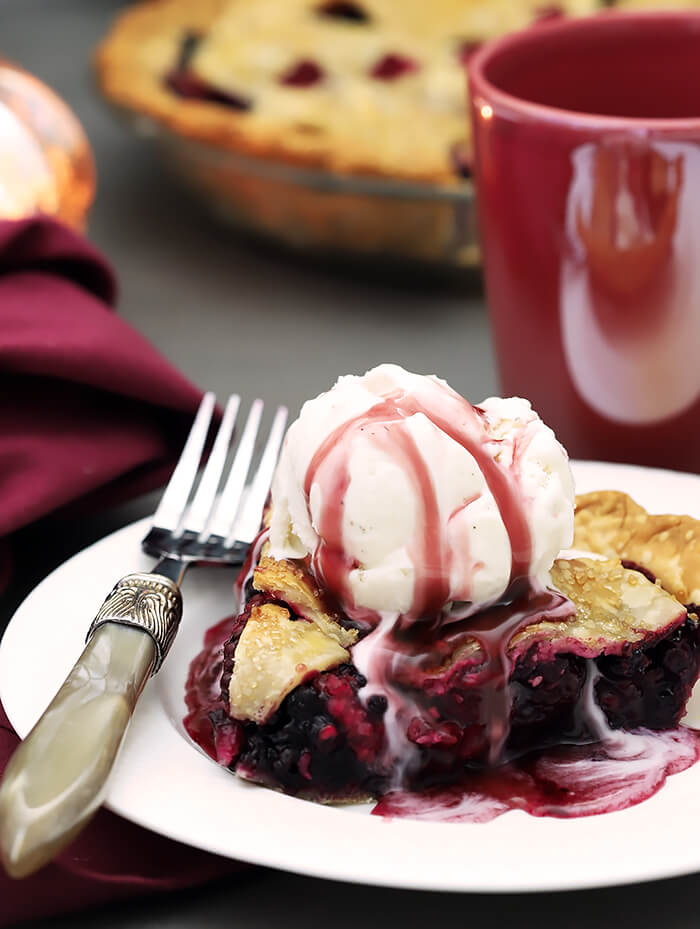 I thought the ice cream could use a bit of red sauce; absolutely not a requirement but I did it anyway. I simply combined some raspberries and blackberries together with water, mushed them a bit and then added the same amount of sugar as I had water. Boiled until the sugar was dissolved and then strained it to get rid of any whole fruit or seeds. Actually a berry simple syrup, easy peasy.

You could actually just melt some strawberry or raspberry jam too if you wanted to do something similar; heck if I had thought of that yesterday, it’s what I would have done.

The best part though? This pie was fantastic. I have a mixed berry jam I love and now wonder why I have never done this before; the combination of berries makes for a delicious pie. I used what I had; the total was five cups of berries. You can do the same with any ratio of berries, your pie doesn’t have to include the same exact amount of three berries as mine.

When perusing ingredients you’ll notice that I have indicated from 1/4 to 1/2 cup of sugar…lots of blueberries with their natural sweetness will require less sugar, the more raspberries you use will need more. For my mixture of 2 cups blueberries, 2 cups blackberries and one cup of raspberries I put in 6 Tablespoons of sugar; sort of in between. The pie was sweet but not too sweet, just how I like them.

Have a warm and safe Halloween, whether you are staying in or going out and a big BOO to you! 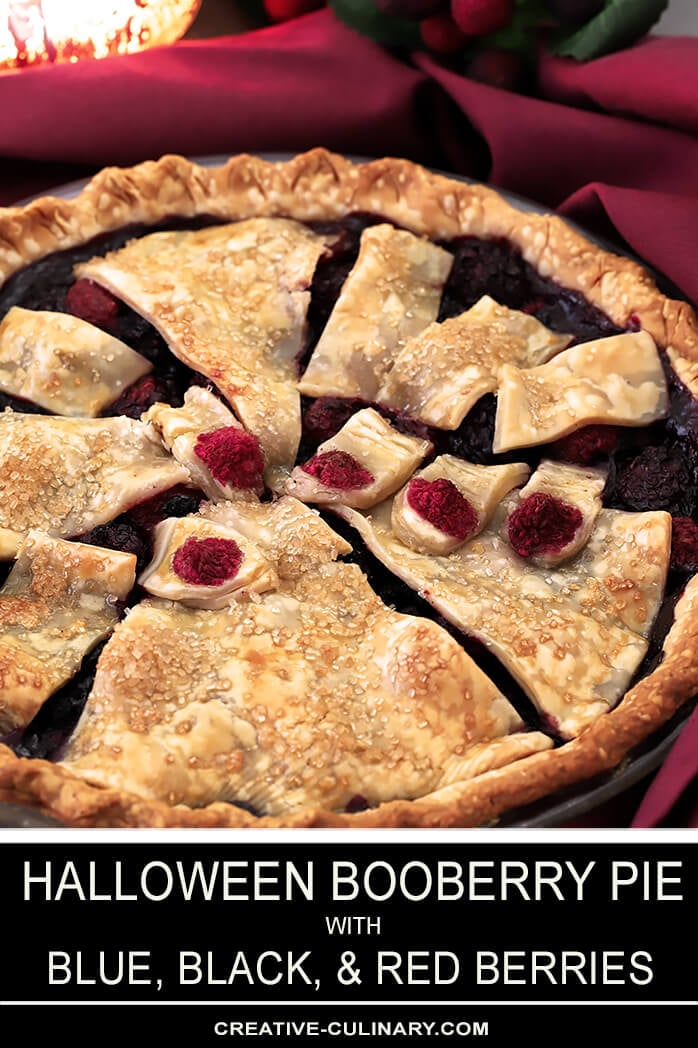 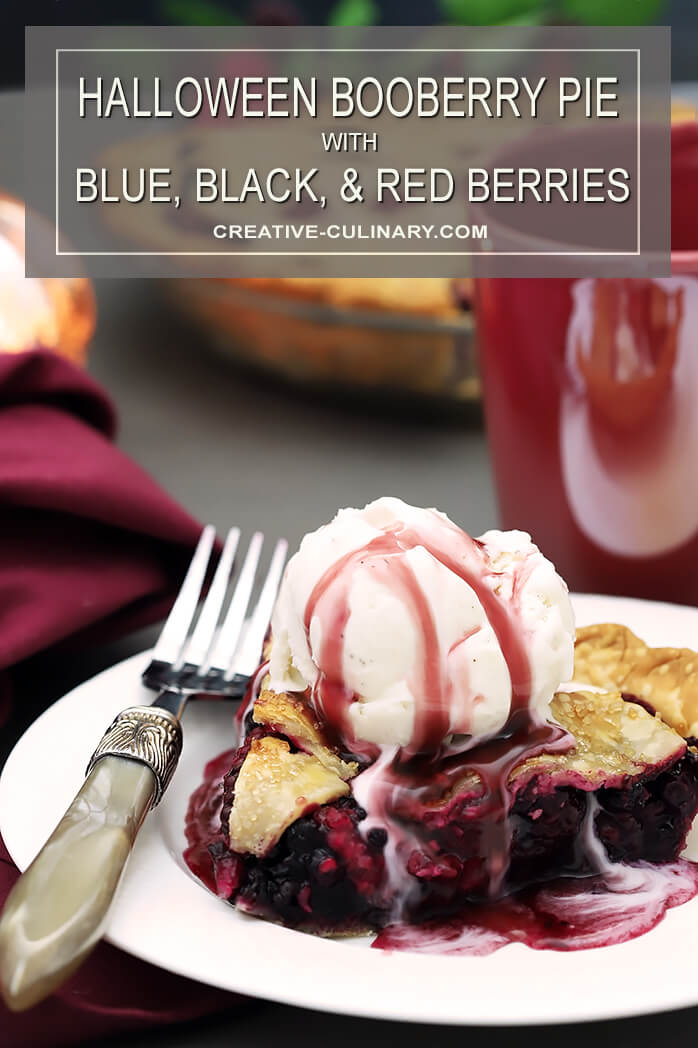