You are here: Home / Soups and Stews / Chile Relleno Soup

My absolute favorite Mexican dish are Chile Rellenos. I should have made this soup a long time ago; the flavor is a perfect representation! 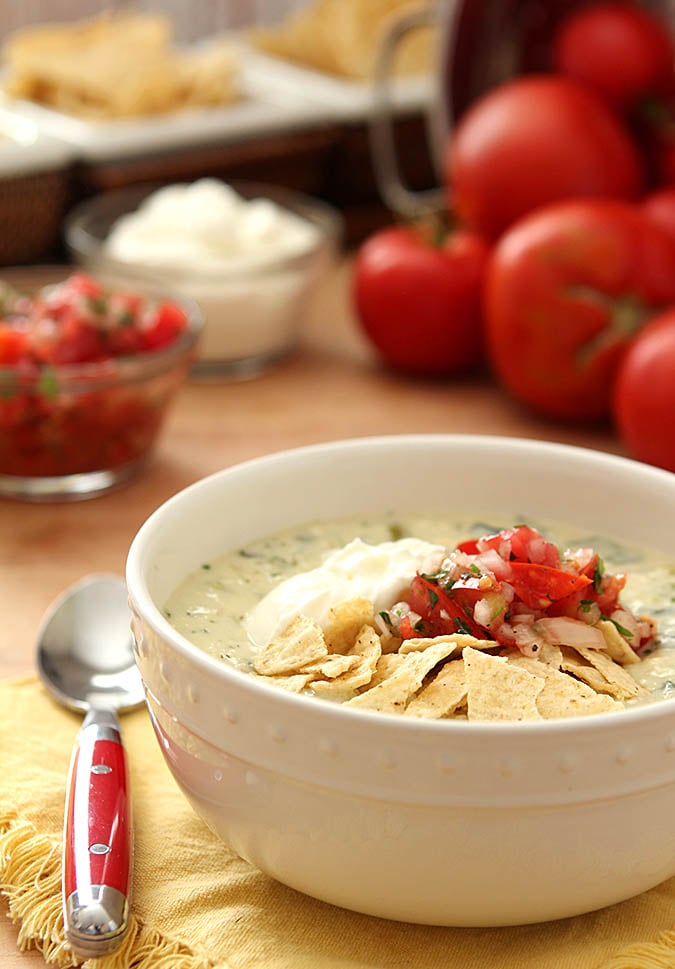 When I moved to Denver Mexican food was so far off my radar that I’m not sure I had ever had any. Well, maybe except guacamole. My mom came back from a trip to Mexico when we were kids and she shared it with us and though I turned my nose up for a couple of years, once I gave in and tried it I was smitten…long before I fell in love with this Chile Relleno Soup!

My uncle had even visited Mexico and married while there but I don’t ever remember eating the foods prepared by my Aunt Maria…boy was that a mistake. North Carolina was equally devoid of all things Mexican but things changed dramatically when we moved to Denver, home of a great deal of Mexican influence.

That being said, I don’t frequent the small restaurants hidden in off the way places in Denver proper and most of my Mexican here is still limited to restaurants I have to admit are more chain-like in nature so I am always delighted when I discover someplace new that stands out for their authenticity and last week I discovered a place new to me that is only ten minutes away…I think I’m in heaven! 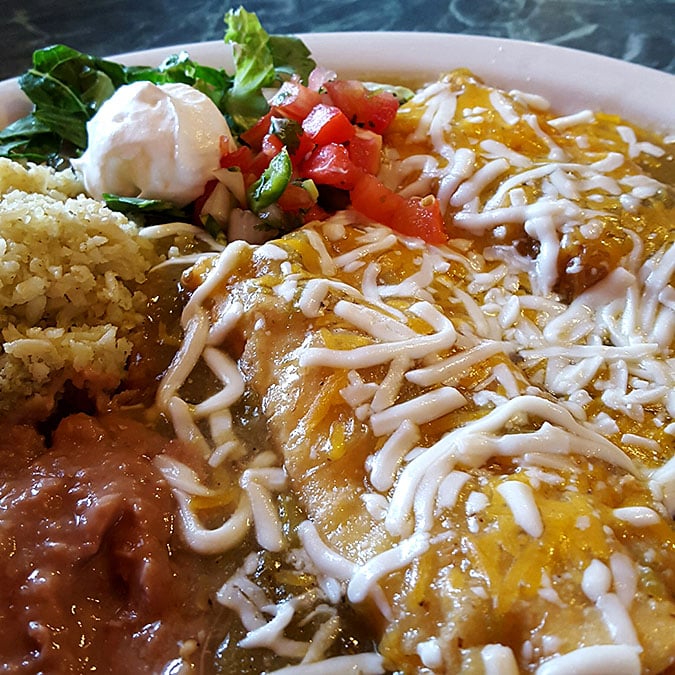 I had spent over a week sick with a miserable cold and felt good enough last weekend to venture out for a bit and wanted to give myself a break from the nonstop leftovers I had been surviving on.

I had planned to order something ‘to go’ from Ariana’s in Franktown, CO; a tiny town near me, but once I got there and the crowd hadn’t started coming in yet from the Broncos game, I decided to take a seat and enjoy my food on premises.

So glad I did; the waitresses were so sweet; one even sat with me and we chatted a bit before more people showed up! As for the menu? I have to admit I’m a creature of habit; if there are Chile Rellenos on the menu, I’ll probably order them. If they’re good I may never try anything else; I just love the combination of creamy, perfectly spicy and crunchy all in one dish.

I posted this photo on Instagram and was asked for the recipe. Of course I could try to recreate it but the truth is I knew I would not. Maybe one thing I love about having this dish out is that I am NOT cleaning up a fryer after cooking the crispy relleno! 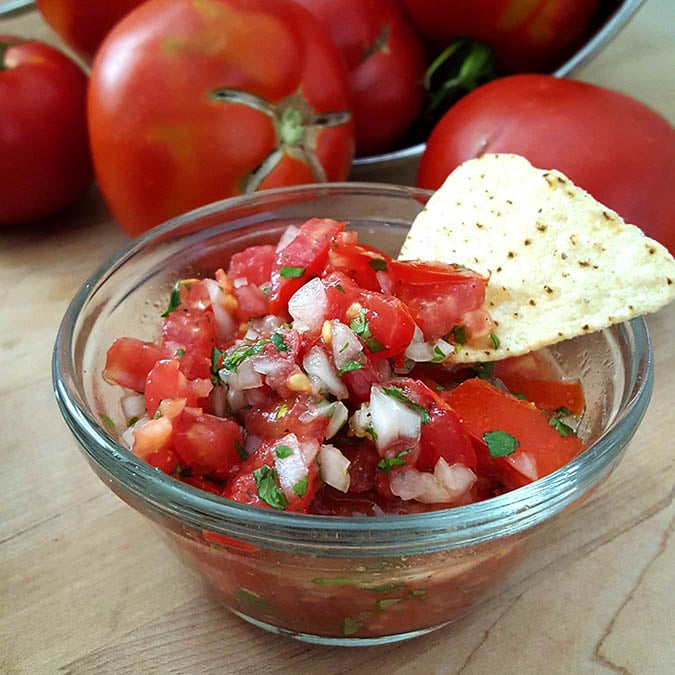 So I decided to punt and try something else and this soup was the result of that effort. I think it covers the flavors fantastically. With a bounty of fresh tomatoes on the counter and just enough cilantro left on the one plant I had in my garden, I fashioned a simple salsa (See Notes).

Creamy soup made with queso fresco cheese and roasted poblanos is rich and wonderful and the addition of the salsa, sour cream and crumbled tortilla chips for garnish brought in brightness and crunch that is part of what I loved from Ariana’s Chile Rellenos. 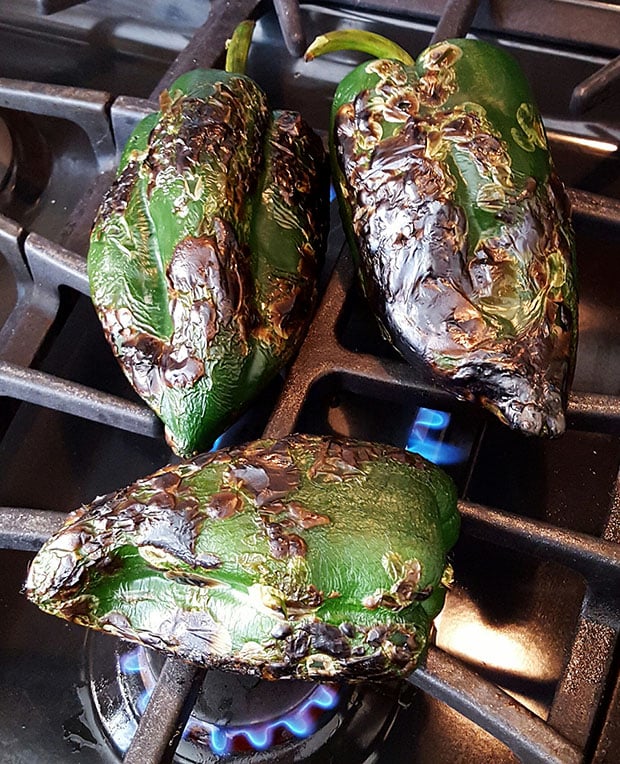 Maybe this is one big reason I REALLY wanted a gas stove with my new home? Sure doesn’t hurt…although this time of year there are vendors everywhere with roasted Hatch chiles for sale, doing the same with Poblano Peppers require roasting at home and I love the results from cooking them over my burners. No gas stove? No problem, they do just as well under the broiler. 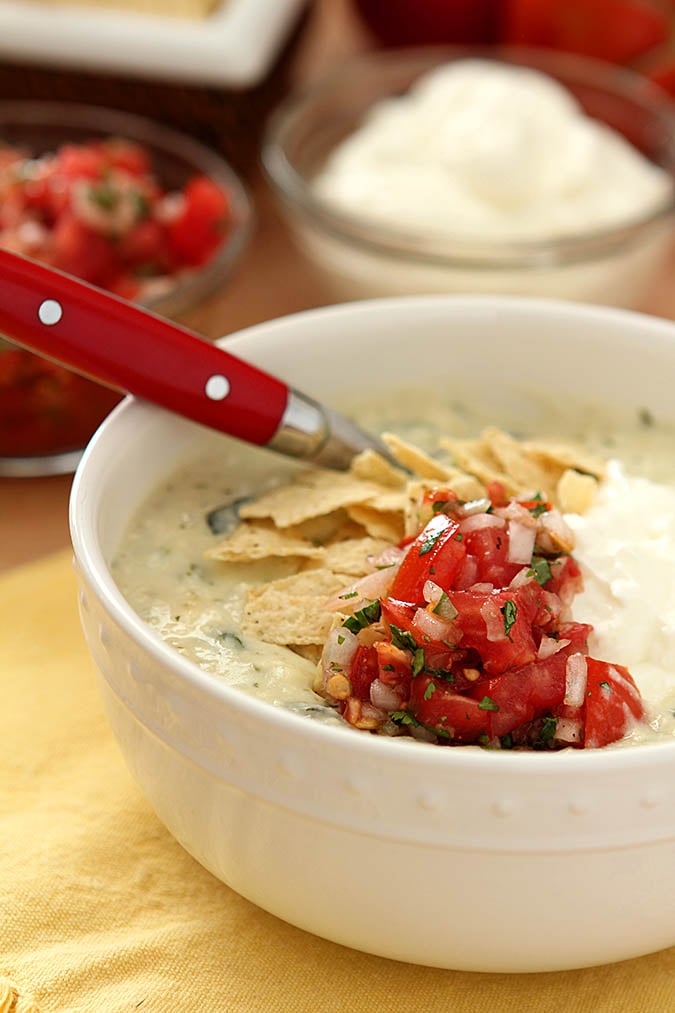 When I first made this Chile Relleno Soup I had the notion of putting some additional cheese on top and melting it under the broiler but the truth is it just didn’t need it. It’s thick enough that the toppings didn’t sink to the bottom.

I think that’s why I had thought a layer of melted cheese would be good and I’m so glad I tried it without first; any more ingredients would have been overkill; it’s rich enough just the way it is.

Can I just tell you without bragging how amazing this soup is? It hit all the right notes and while obviously not ‘a’ Chile Relleno, both the flavor components and the rich mouthfeel all served to offer up a rendition that is more than adequate if craving that taste and wanting to serve something at home.

I had considered frying some tortilla strips for the garnish but as I finished I realized that without that step that this soup was really pretty easy and doable so opted for good tortilla chips from the grocery instead. That was a good call; cleaning up a fryer for a few crispy tortillas really was not warranted.

If you love Chile Rellenos like I do you must try this soup; it’s so good I squirreled the leftovers away back in the far reaches of the fridge. They’re mine, ALL mine!!

This post is this weeks edition of The Food Network’s #FallFest featuring soups. For more fall soup ideas, be sure to visit my friend’s sites too! 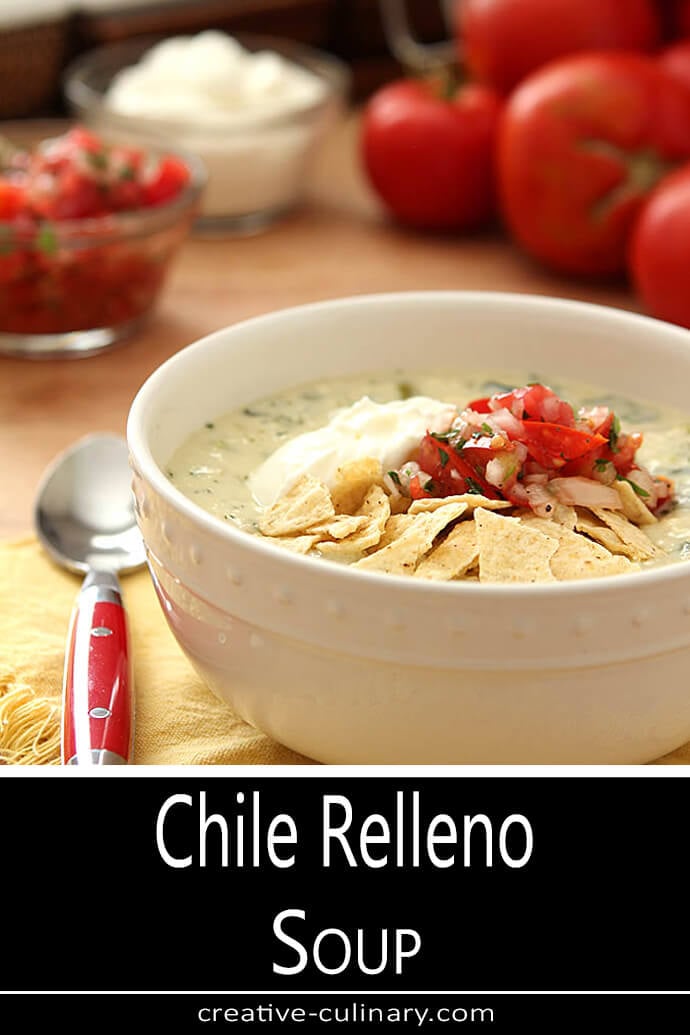 I added the Queso Fresco cheese with the chopped Poblano Peppers and knew it would not entirely melt; leaving little pillows of cheese in the mix. If you prefer your soup be creamier, add the cheese prior to the poblanos and blend the mixture with an immersion blender first.

Add all ingredients to bowl, mix and let sit in fridge for at least 15 minutes.