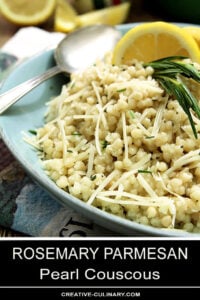 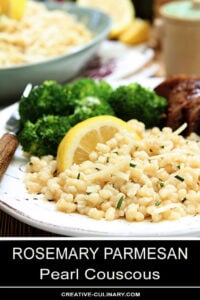 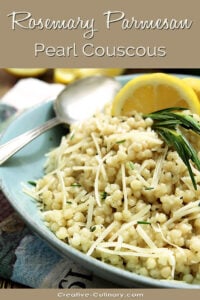 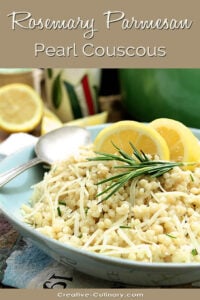 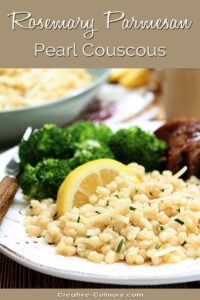 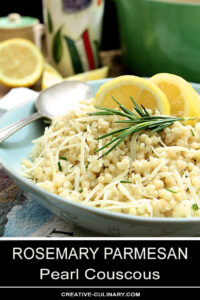 This Rosemary Parmesan Couscous is both simple and delicious; the perfect weeknight side dish that can be served warm or at room temperature. 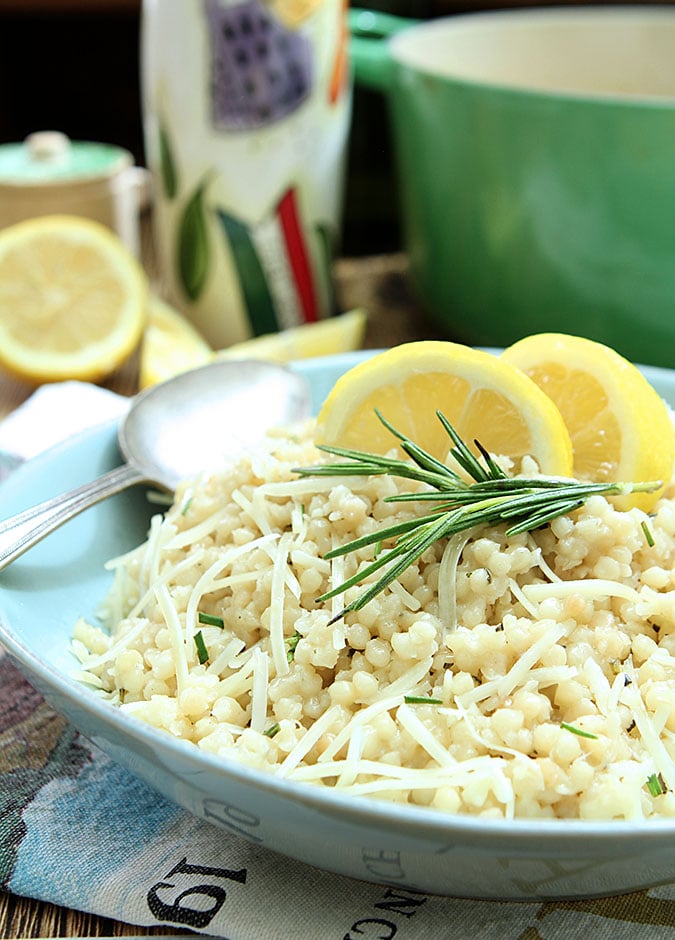 The first time I enjoyed a dish with pearl (or Israeli) couscous I had no idea what it was. I knew of couscous as a tiny round pasta made from semolina and wheat flour and truthfully it never appealed to me; about as small as I went with pasta was orzo. Guess I was waiting for this recipe for Rosemary Parmesan Couscous.

I was served a dish at an event and was intrigued by the small round pearls included in it so asked my host what we were eating.

I thought it would be something new to try and decided to make it my next mission to locate on a trip to the grocery store. As fate would have it, I also spied a recipe using this little pasta on an episode of the Food Network.

Any chance you remember the Hardy Boys? They won a season of the Next Food Network Star maybe a decade ago and had (have?) a show for a bit but they were no Guy Fieri apparently…think they’re long gone!

I took the basics from their recipe and added my own touches and we’ve loved this Rosemary Parmesan Couscous as a simple weeknight dish ever since. 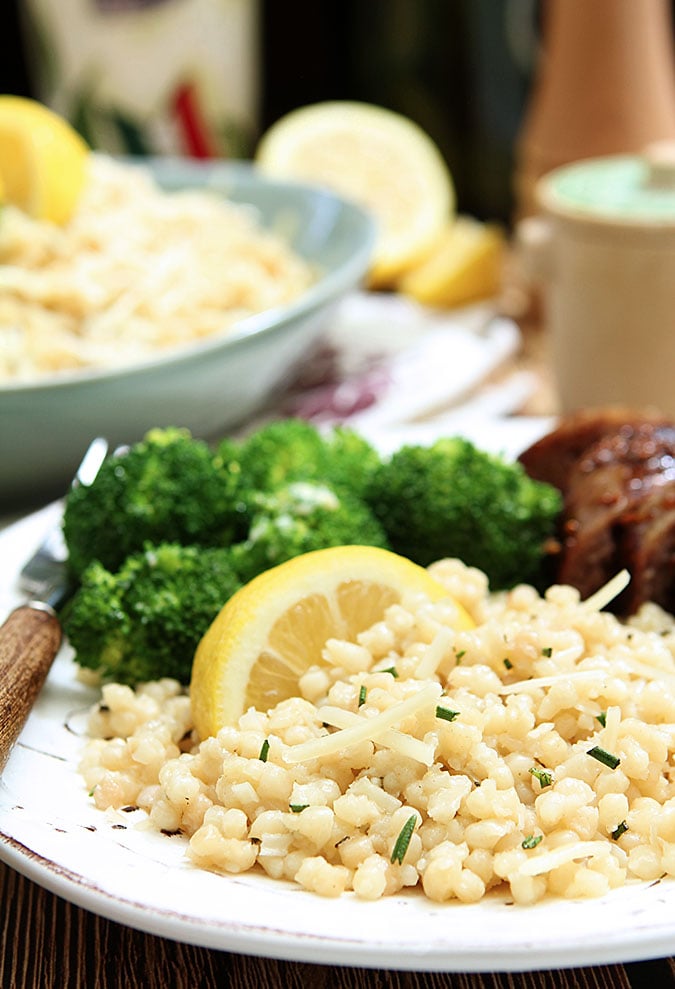 That being said I’ve never bothered to include my version in a blog post; maybe thinking it was too simple? I have a great friend who has often reminded me that people love simple to prepare dishes and begged me to add it to my online repertoire.

I recently had friends for dinner, I had Rosemary Parmesan Couscous on the menu and I remembered those words and decided no better time than now.

As it happens, the theme for this month’s post with Swanson® as their Brand Ambassador was ‘Show Off Your Culinary Side’ by elevating a weeknight meal using their new bottled broth to add flavor to a favorite side dish. Could not have been a more perfect opportunity! 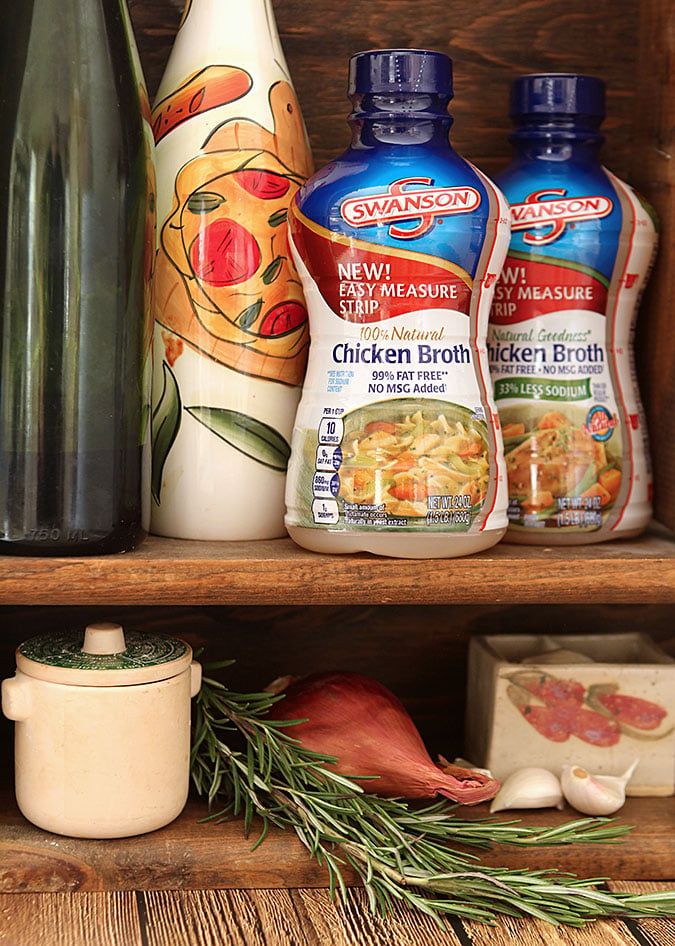 The bottled Swanson® Chicken Broth was literally made for me. I don’t often open a box of a favorite broth or stock unless I’m adding the full container to a dish so it’s often been limited more to soups and stews.

I might throw some dry bouillon into side dishes but there is no way that compares to adding some Swanson® Chicken Broth and I’ve already found using either the beef or chicken stock makes rice a much heartier side dish for family dinners; why not try the same with this couscous?

One thing about couscous that differs dramatically from regular pasta and is more similar to rice or quinoa is that the liquid is cooked into the grains completely, nothing is drained after cooking so the additional flavor from a broth makes a big difference. 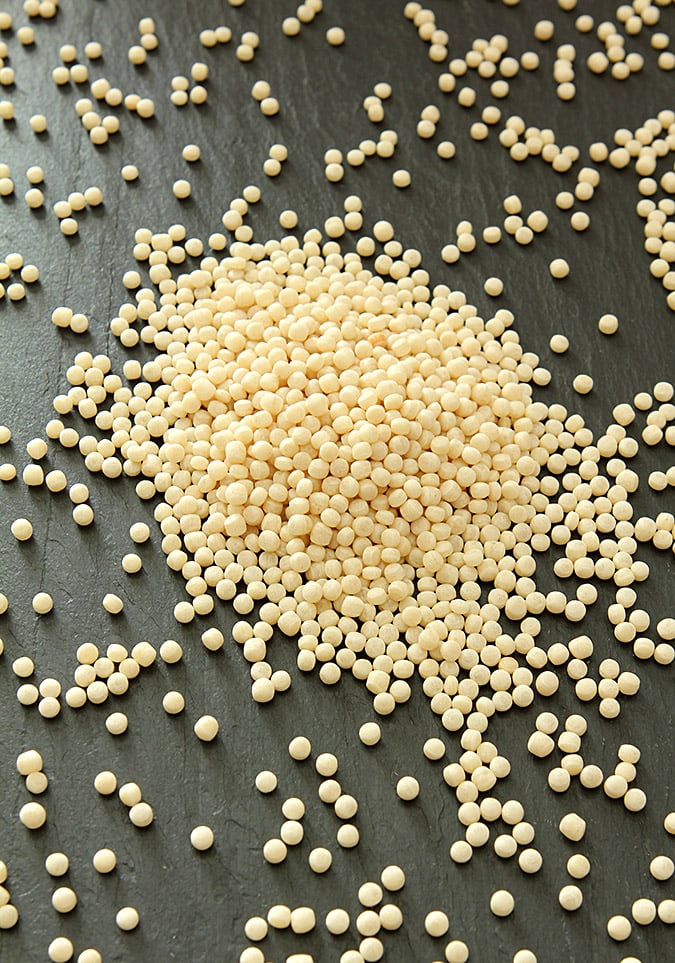 Pearl Couscous if often referred to as Israeli couscous. That identifier makes sense; each orb is about the size and shape of a small pearl. But curiosity finally got the best of me as I’ve never known why it was called Israeli couscous.

Legend has it that the Israeli company Osem claims to have “invented” Israeli couscous in the 1950s but in truth it is simply a marketing term for what was known previously as North African berkukes or Palestinian matfoul; all popular in Jordan, Syria and Lebanon. This little pearl has some history!

Unlike the more familiar small, yellow semolina-based North African couscous, Israeli couscous is more than twice as big and is toasted rather than dried. This is what gives it such a nice nutty flavor and sturdy composition and makes for an end result that has a nice chewy bite and stands up well to other ingredients.

Adding onion, garlic, rosemary and Parmesan brought some of my favorite flavors together into this one dish and my friends love it as much as I do; again I heard that I should post it and so…here I am! 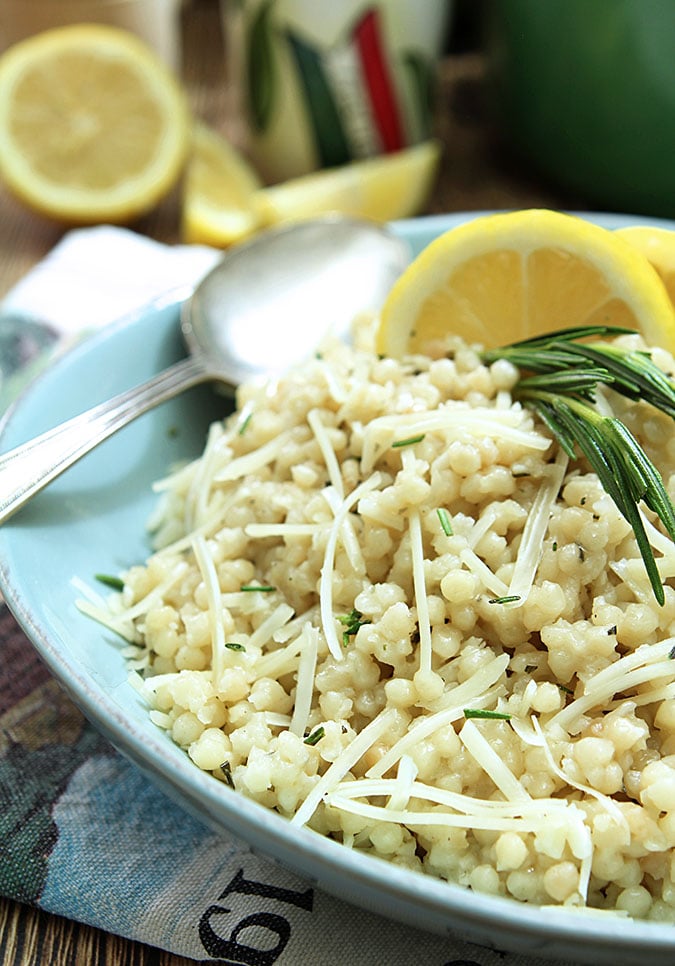 One caution? Don’t even think about doing this with dried rosemary; it’s uninviting and bland. Fresh rosemary is so readily available at the market today that it should not be difficult to find. It’s the first plant I get into a pot in the Spring so that I can harvest my own at least through October.

Rosemary does not over-winter in Colorado but it is actually a perennial in some more temperate areas and you could possibly have it available fresh all year long.

In November I start looking for stores that sell it in the shape of a Christmas tree and I’ll buy one for the kitchen just so I can make this Rosemary Parmesan Couscous during the winter. It’s simple and yet so tasty; try it…I know you’ll agree! 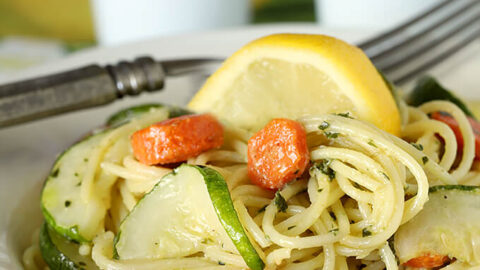 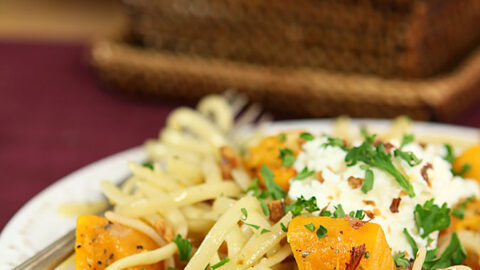 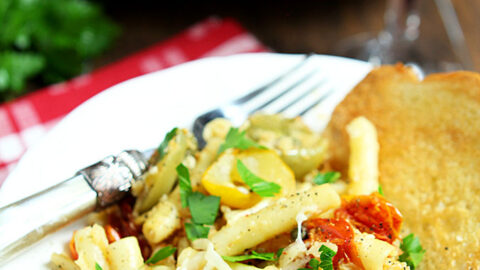 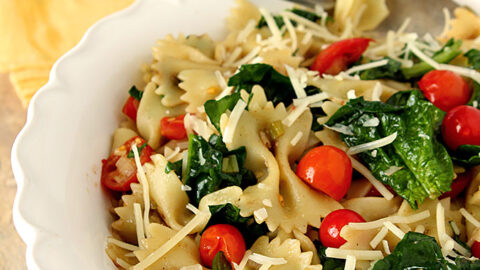 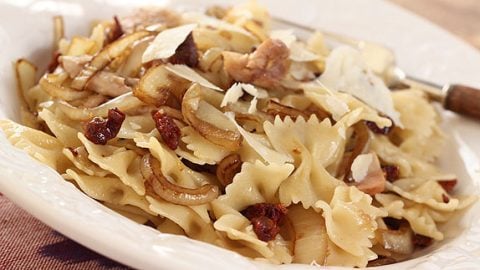 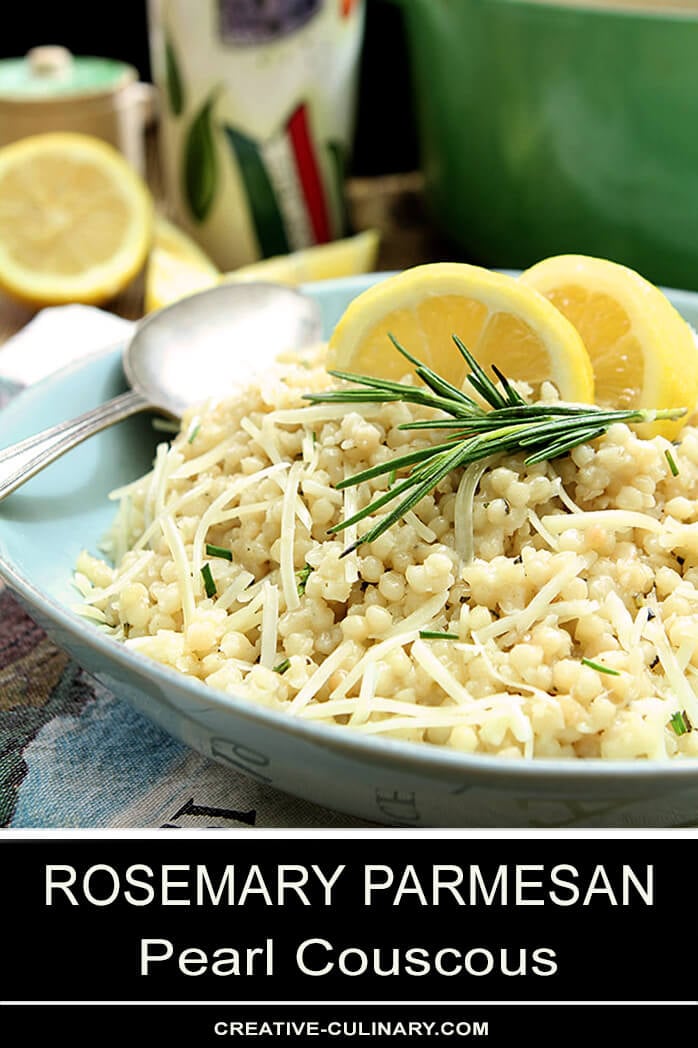 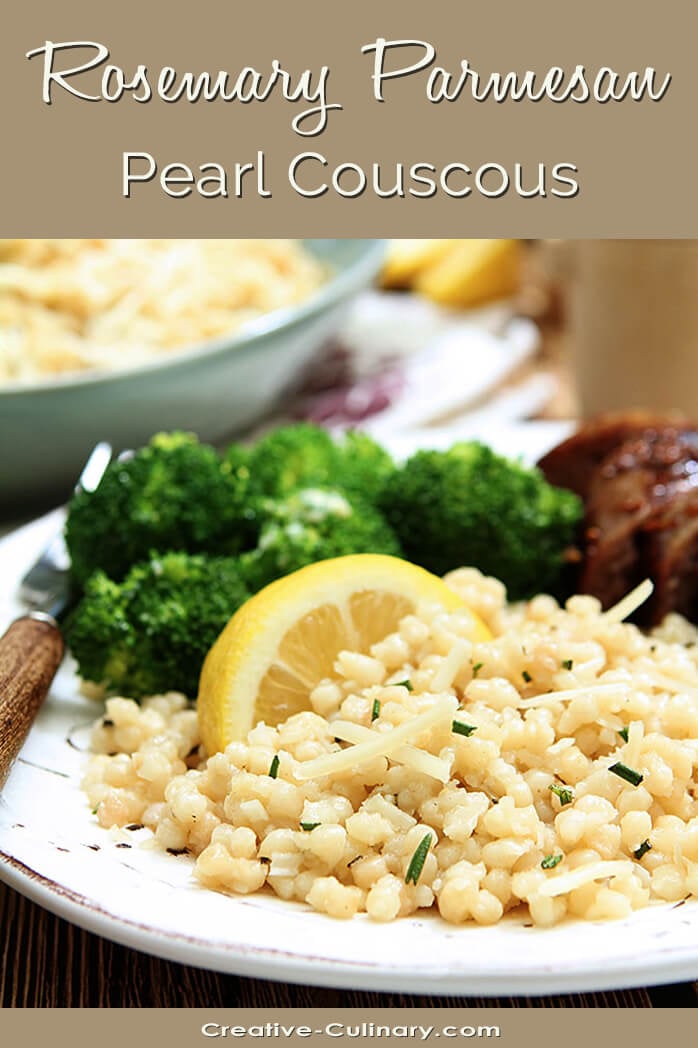