Sooooo…here we are. Saturday again. With a cocktail for Friday Cocktails. Why can’t I seem to get it together anymore? Well, I had a moment yesterday to consider that and I think summer is to blame. Summer means more work in the garden and with a newish yard that’s still a LOT of work; my time is stretched much thinner. But more then that I think it’s lack of air conditioning. Which made this Blueberry Mint Moscow Mule all the better when I finally got to it!

Now don’t get me wrong, I’m not whining…just yet. When I bought this house of course it was standard to have air put in and the shocked faces when I said ‘no air’ are still in front of me. But I had a plan. First I bought a ranch house surrounded by 2-story homes…even without big trees yet I am very protected on both sides since we have so little space between our yards. Second I decided I would rather be in charge of that unit; I am such a big energy conservationist I wanted to make sure what went in would be a good match for my conservative self.

Somehow it has never gotten so bad I’ve been inclined to rush out and plunk down three grand to cool my house for 5 days a summer. Granted, without Colorado’s low humidity and cool nighttime temps this would never work. So I’m managing fine but it does mean I avoid some things in the afternoon. Like baking things in the oven and shooting photos. My studio does warm up a bit as it faces Southwest and the light can also be a bit too bright which means I can be inclined to rush the process. Rushing is not good. You might not be able to discern like I can but I could point out to you now which photos were rushed and I’m never happy I let that happen. So hope you’ll forgive me that you had to wait an extra day but this one was worth waiting for! 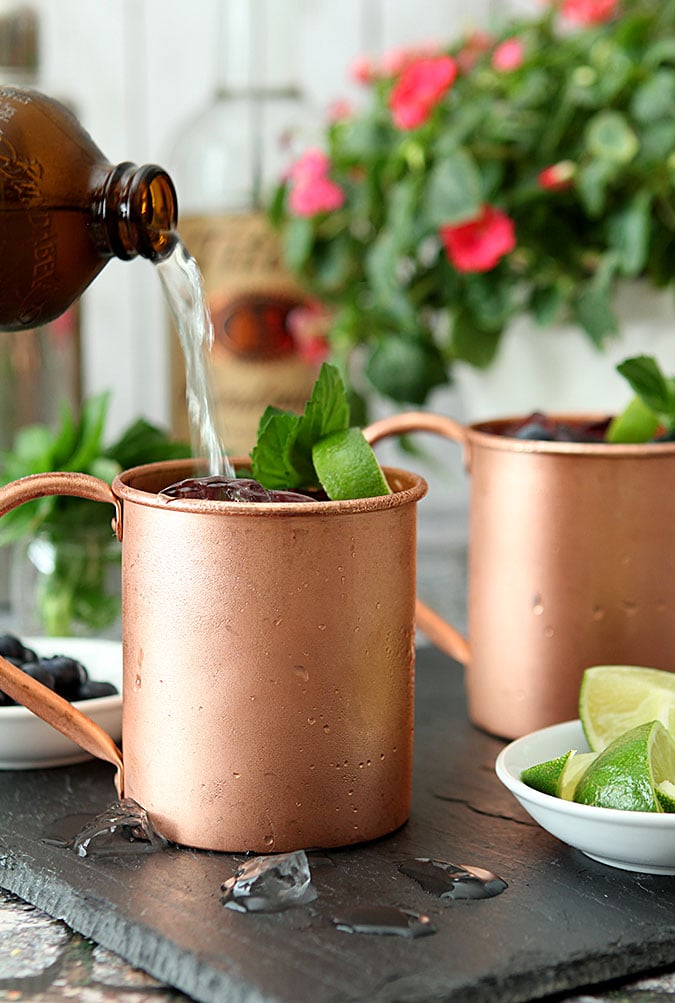 I LOVE Moscow Mules even if my first one was just a couple of years ago. That name is not all that appealing I have to admit. Apparently the Moscow connection is simply the use of vodka and story goes that Mule is because of the kick of ginger in ginger beer. Talk about a kick…a couple of weeks ago some neighbors had walked over and I threw one together. I used a brand I shall not mention that had sent me some samples. OOOOOOOOOOO MMMMMMMMMM GGGGGGGGGG.

That stuff gave a whole new meaning to spicy and I like spicy…but a quick read of the ingredients also included some cayenne pepper. Whoa…as much as I like spicy I think it ruined the cocktail. Even their ‘regular’ product without cayenne was a bit harsh on the tongue.

So I reverted back to my fave and I’m so glad I did. I’ve been drinking Bundaberg Ginger Beer for years and it’s just perfect in my book. Definitely a taste of ginger that’s evident but nothing at all harsh about it; it is simply my favorite for cocktails calling for Ginger Beer. I get mine at Cost Plus World Market; check out their store locator to find one near you. If it’s not available close to you just try to find a good product where the ginger really shines and worse case scenario try a good Ginger Ale; it won’t be the same but will still be a nice cocktail. 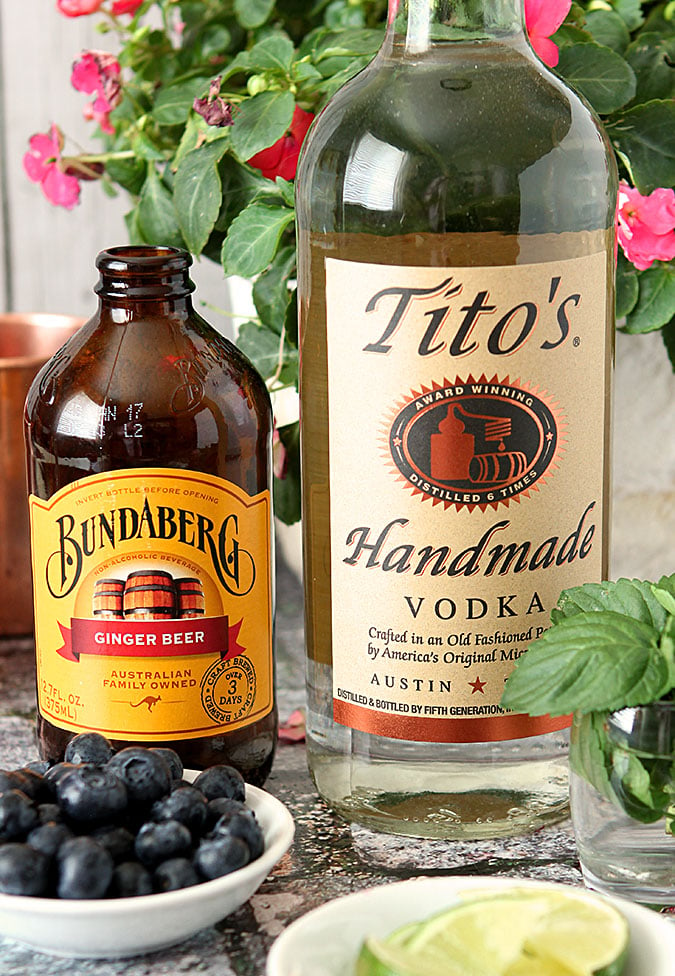 Speaking of neighbors? I had just received a couple of bottles of Tito’s Handmade Vodka to use for a post and Kevin, one of the neighbors who were here saw it and said, ‘Now THAT vodka makes the BEST Moscow Mules.’ Oh really? Well, thanks for that good advice and I was on my way. I made this Moscow Mule a couple of years ago so it was now on me to try something new and you know…I did a lot of work on that. Like I noticed the blueberries in the fridge…yeah I make it easy like that. 🙂

Their vodka has won the prestigious Double Gold Unanimous Judge’s Choice at the San Francisco World Spirits Competition, besting 72 of the world’s premier vodka brands. Tito’s has bragging rights for the critical acclaim it has received for its impeccably pure taste, affordability and brand growth. Their process, similar to those used to make fire single malt scotches and high-end French cognacs, require more skill and effort than others, but it’s well worth it! 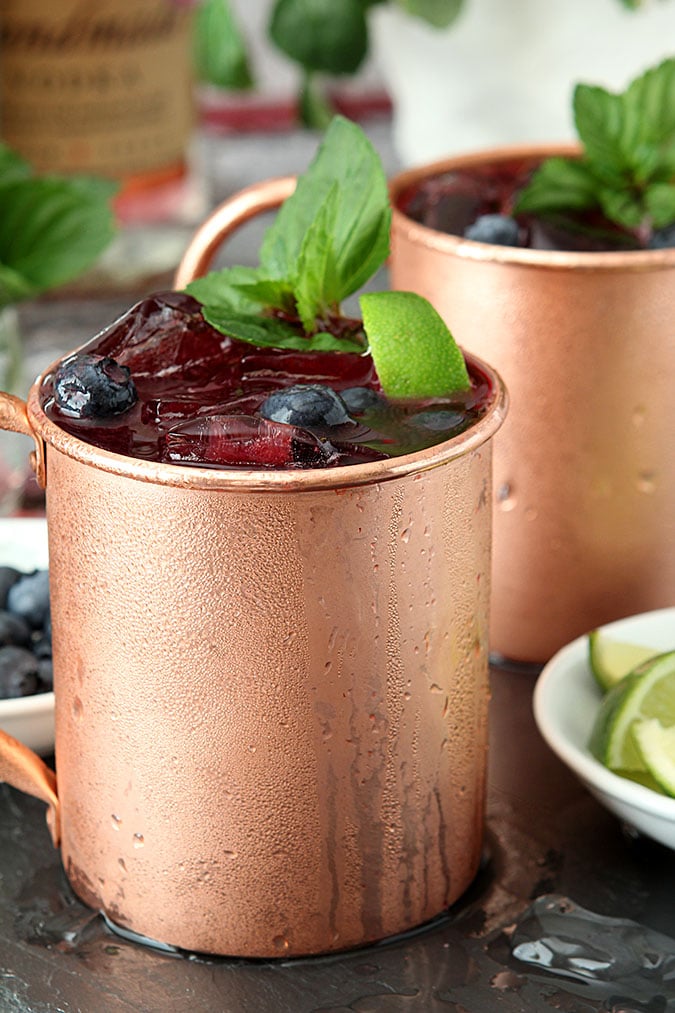 I was impressed and have to agree with Kevin; this is one fine vodka. These two brands together? Well they made for one extra-fine cocktail; of course the blueberries and mint in this Blueberry Mint Moscow Mule did not hurt one bit. I plan to try some more flavor combinations with Moscow Mules…this should be fun! 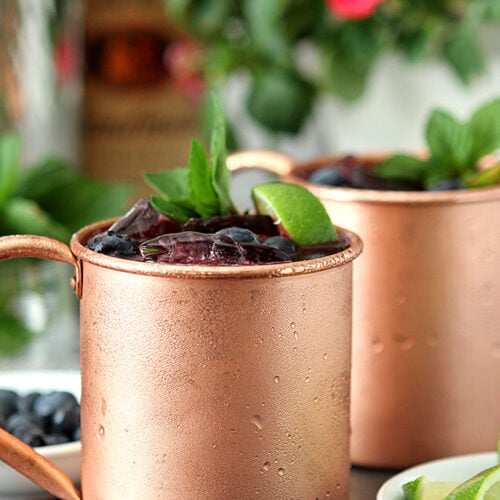 For the Blueberry Mint Simple Syrup:

I was compensated for this post, however all commentary is my own. 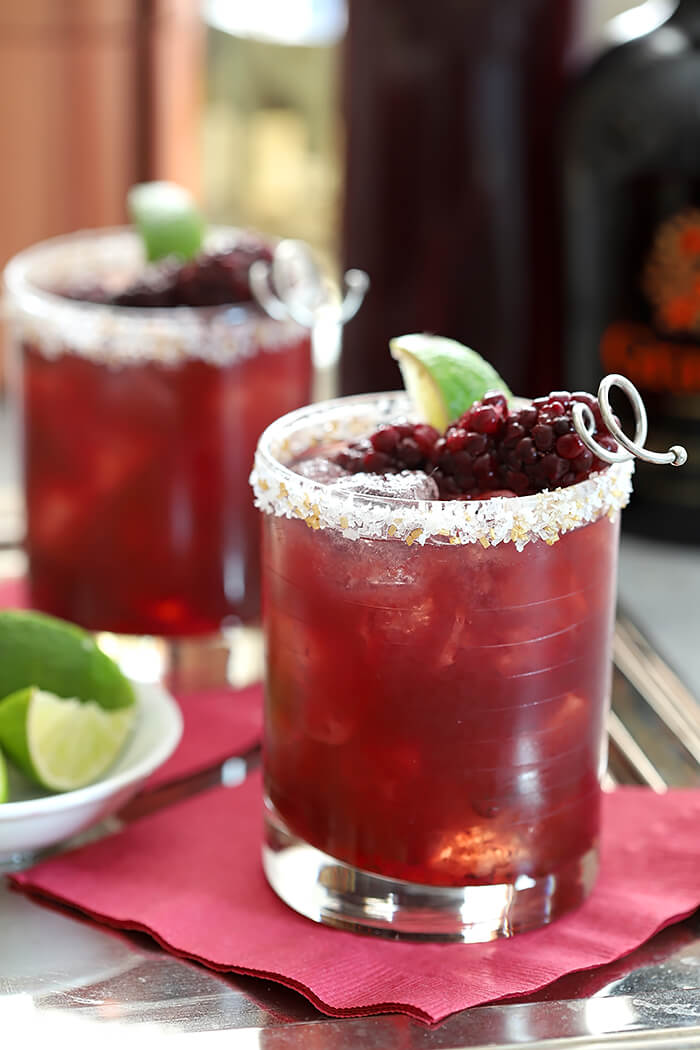 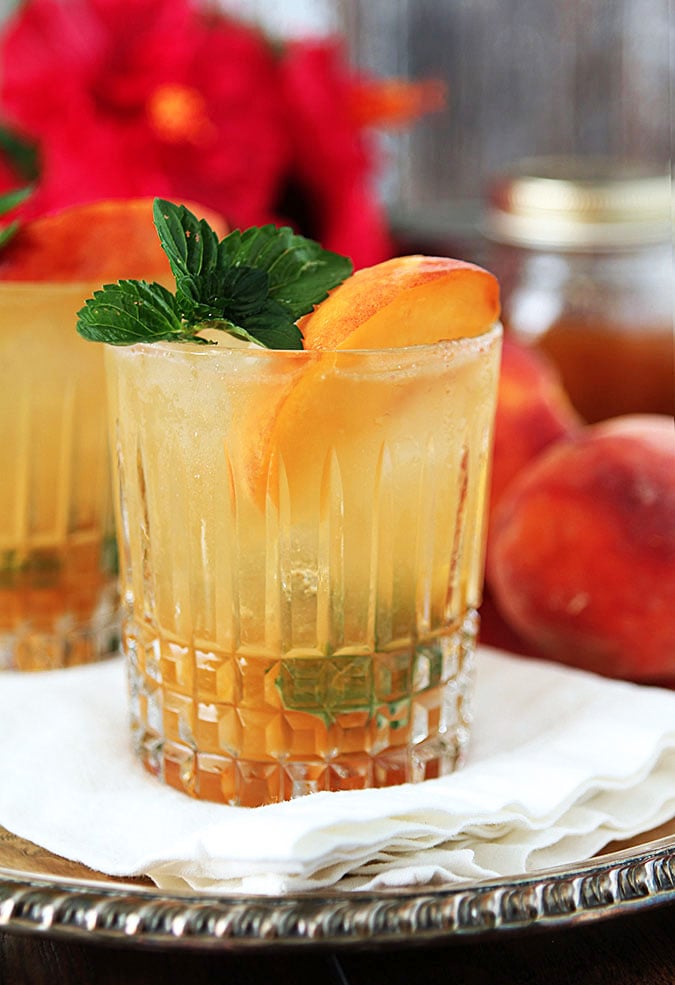 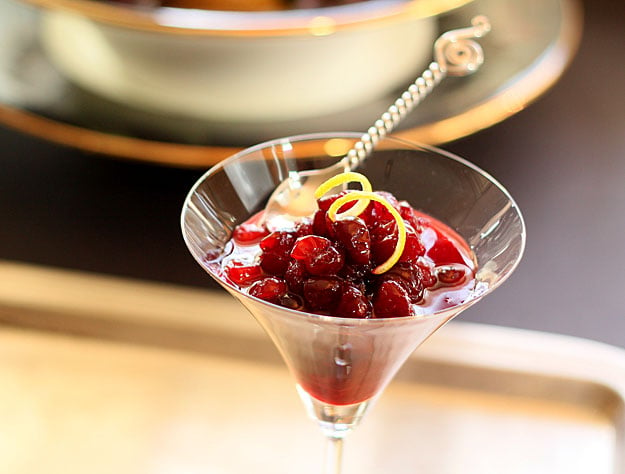 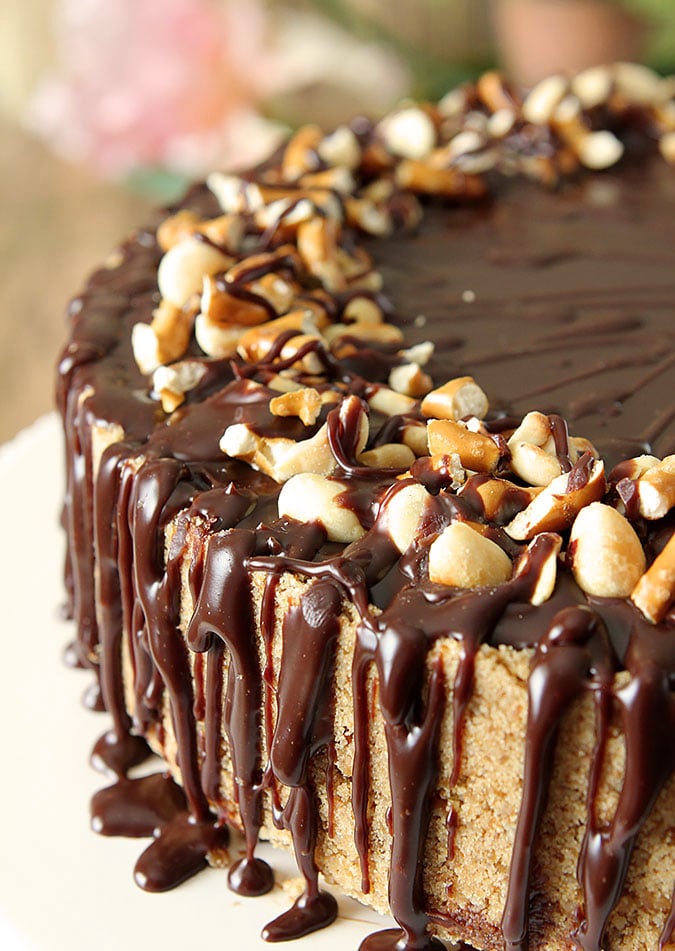 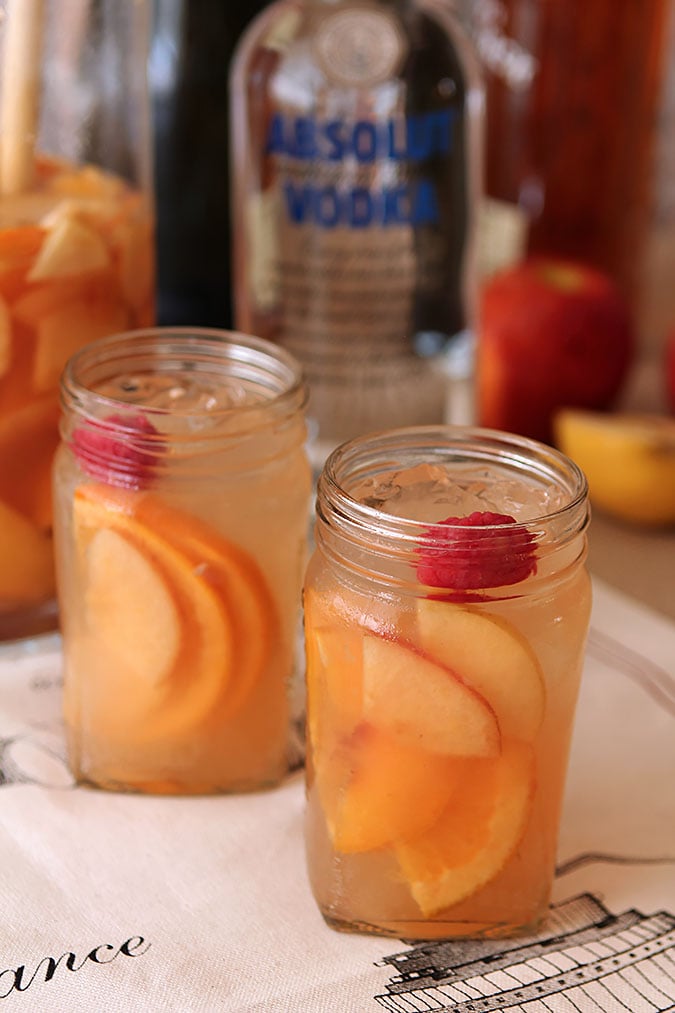 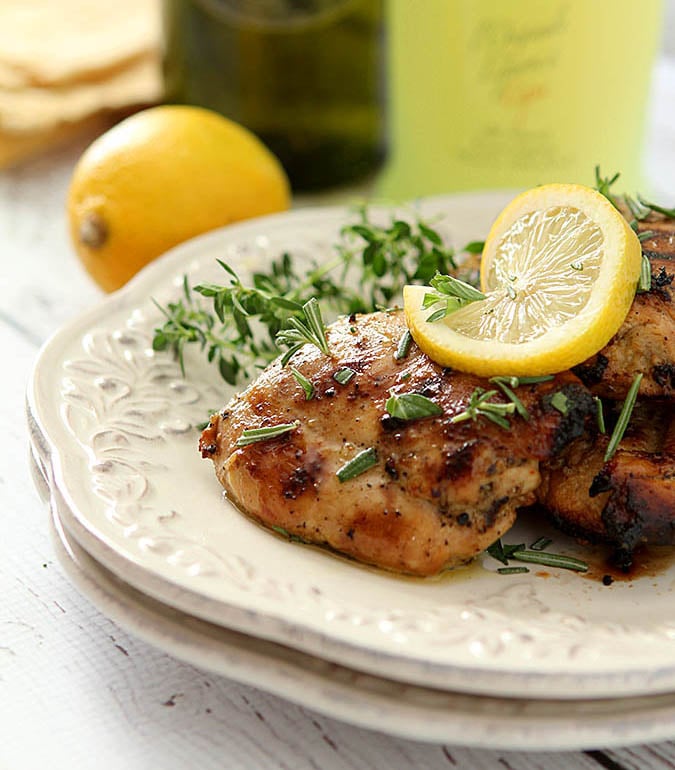 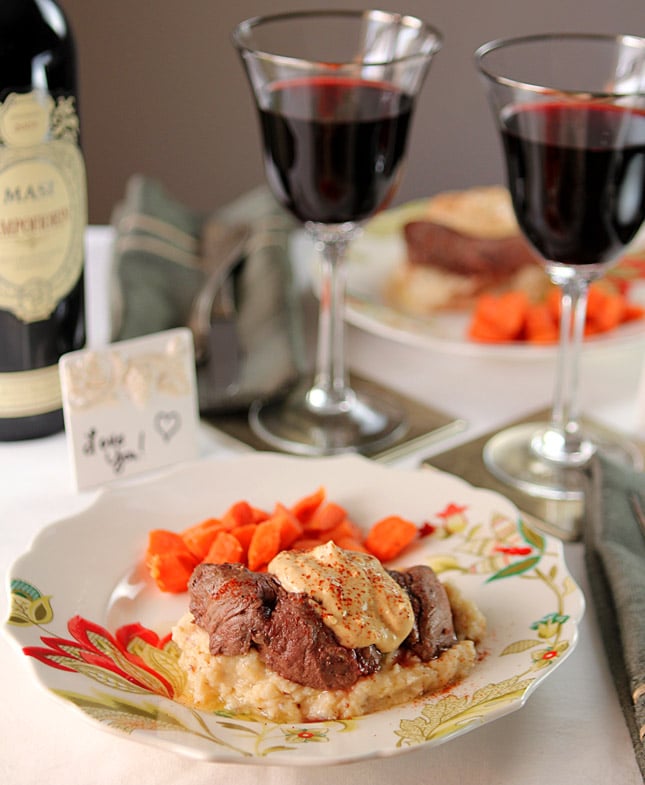 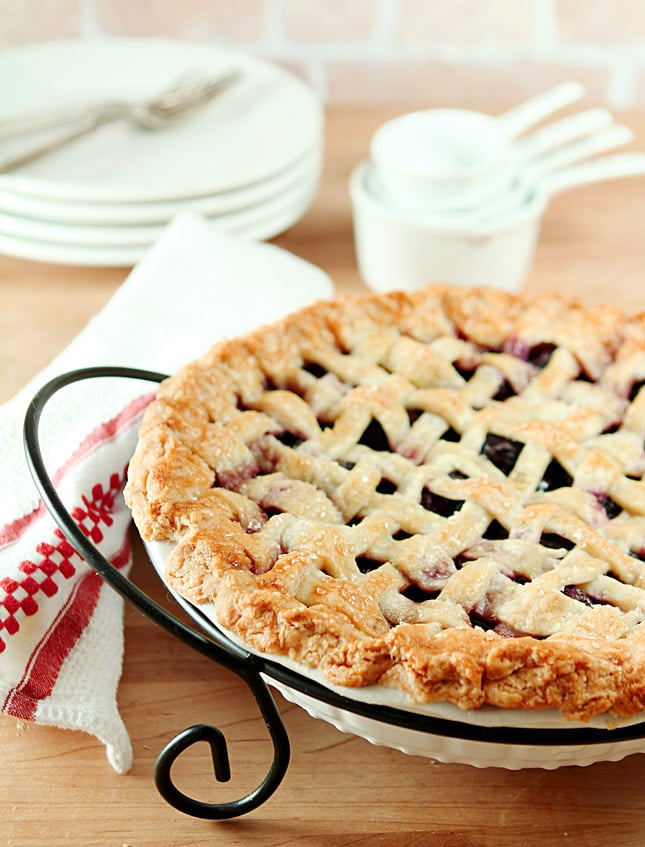