You are here: Home / Friday Cocktails / Bourbon / The Old Fashioned – A Classic Cocktail

A classic cocktail, the Old Fashioned will always be a delicious bourbon drink that never goes out of style.

Thanks in part to Don Draper and Mad Men, the Old Fashioned is seeing a resurgence in popularity. I have to wonder why it ever faded. I know both of my parents loved them and I recall I loved stealing that bourbon soaked cherry whenever I could!

The heyday of the Old Fashioned was in the late 1800s and early 1900s when it acquired the handle by which we now know it. For decades it had been simply known as a whiskey cocktail.

When bartenders of the post-Civil War days started getting too fancy with their garnishes, cocktail purists began calling for a return to sanity. Cocktail purists are a cranky bunch aren’t they; I always wonder exactly who they are? They are so rigid and righteous sometimes that doggone it; they make me want a drink! 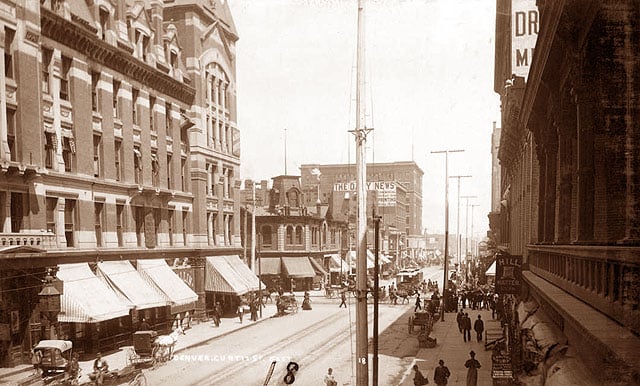 Originally or at least in 1806, a “cock tail” was a morning drink made up of a little water, a little sugar, a lot of liquor, and a couple splashes of bitters (I can actually imagine that on Larimer Square pictured above in downtown Denver).

Freeze some water, mix it with whiskey, and you have an Old-Fashioned. And a fine drink it is too; as much as I love fruity, swirly, pretty drinks I also love something that lets the bourbon shine and this is it. No place for cheap bourbon either; it is front and center and it had better be good enough to drink on its’ own if you’re pouring an Old Fashioned.

An 1886 edition of the publication Comment and Dramatic Times contains the earliest known print description of the newly christened “Old Fashioned.”

“The modern cocktail has come to be so complex a beverage that people are beginning to desert it,” said the editor, Leander Richardson. “A bartender in one of the most widely known New York establishments for the dispensation of drinks was telling me the other day that there had set in an unmistakable stampede in favor of old-fashioned cocktails.”

Mr. Richardson then defined what the standard-bearers were after: a drink “nearly everywhere recognized as being made with a little sugar, a little bitters, a lump of ice, a piece of twisted lemon peel and a good deal of whiskey.”

Still, by the year 2000, they had fallen into relative obscurity. As a sign of how much that has changed, today it’s a rare craft cocktail bar whose menu doesn’t feature either the Old Fashioned or a modern twist on the drink’s elegant formula of whiskey, water, sugar and bitters. 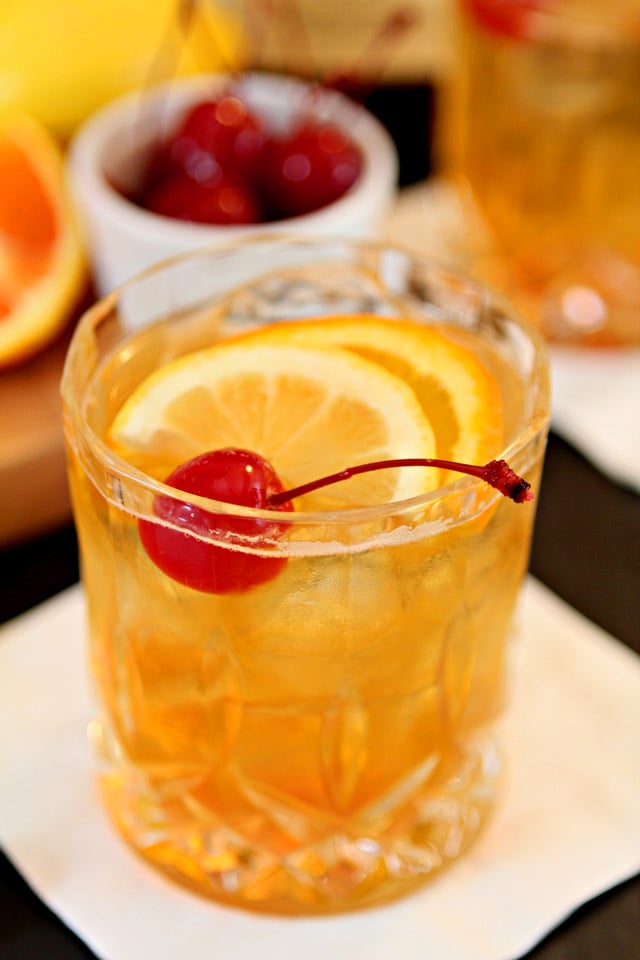 The drink’s prominence was underlined when the freelance booze evangelist Martin Doudoroff unveiled Old Fashioned 101, a how-to Web site that lays down the law on the drink’s proper architecture. I’m good with this information til the end. I like the garnishes; maybe it’s a throwback to those cocktails of my parents but a boozy piece of fruit is always a delight for me and so I do it.

Those now customary fruit garnishes; oranges, cherries, lemon slices, etc, stem from the traditions that American cocktails had visited upon them under Prohibition. The liquor was cheap and fruit garnishes served (supposedly) to help cover that fact.

I do agree that this is no cocktail for muddling; the sweetness of the sugar and fruit should not cover the inherent sweet tones of the bourbon; this is a bourbon cocktail after all and it’s not meant to be sweet and gooey!

My mother loved an Old Fashioned; maybe loved a few too many of them even, so I’ve had a bit of a ‘keeping it at arms length’ mentality but when looking at the ingredients, really what is there NOT to love?

Heck it’s not that far removed from the mint julep I just did a few weeks ago that was so very good. I made two of these and shared one with my daughter Emily; the young woman who loved the cake vodka I could barely tolerate and favors a sweeter white wine over all others.

Still…she liked it too; when done well it’s clearly a bourbon forward cocktail but the subtlety of sugar, citrus and bitters also makes for something more divine than a simple ‘bourbon on the rocks.’

For some folks there is a debate over rye or bourbon? I see no reason for debate; use what you love. No secret I love Maker’s Mark but if you like rye; go that route. Canadian Club is another good choice (it has a lot of rye in it) but please, no cheap bourbon. Pretty please?

Maybe a throwback to those tricks learned during prohibition days but it’s often too sweet and would be overkill in this fine, old fashioned cocktail. 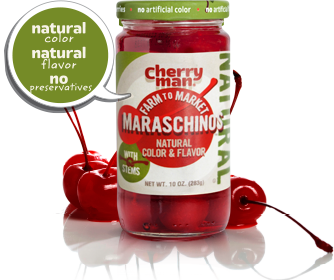 Although I chose to add an array of fruits for garnish I’ve long eschewed the traditional maraschino cherries; they are nothing but food dye and high fructose corn syrup. Since I do like using them for cocktail garnishes I’ve been forced to make my own.

I love them but getting sour cherries is next to impossible and last year when I was gifted with some from a neighbor’s tree; the take was so small that I became a cherry hoarder. ‘Mine, all mine’ was my mantra and I just know it was a quite unattractive side of my personality!

CherryMan to the rescue. As if reading my mind, they inquired if I would care to sample their product. Heck if I had known about them I would have already bought one of their mega Colossal jars of cherries!

They have what those other cherries do not; as in they actually taste like cherries. I was happy to have had some on hand when I made this cocktail; if I’m adding a garnish to my cocktails I don’t want it to be something I have to apologize for! Grown and packaged in Michigan, a state well known for their cherries; this is a true find.

Is your Dad an Old Fashioned kind of guy? Make this cocktail for him on Father’s Day and he will love you forever! 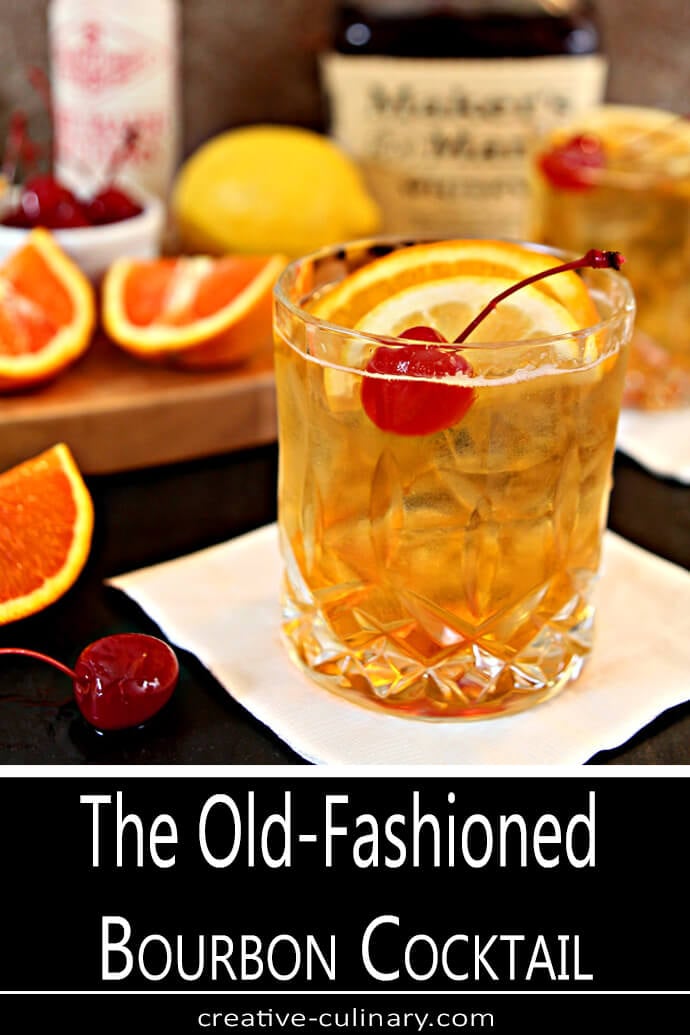 The Old Fashioned – A Classic Cocktail