You are here: Home / All Recipes / Vootbeer – Vodka, Root Beer and Whipping Cream

I was recently invited by Rob Masters, Distiller at Boulder Distillery and owner of Rob’s Mountain Gin to attend a monthly event that is held for folks in the hospitality and liquor industry in the Denver to Boulder corridor. It’s a very relaxed time to learn more about Boulder Distillery; try some of their products and get a close look at their operation. They take this unique step to introduce people to their small and thriving company that operates alongside a frontage road in Boulder, Colorado. Rob is also President of the Colorado Distiller’s Guild and a great resource for someone like myself who has become more and more aware of the growth of both distilled spirits and wines in our state and loves exploring the diversity we offer. Of lasting significance was this Vootbeer – Vodka, Root Beer and Whipping Cream. I had a great time discovering while visiting and left with a fun recipe too! 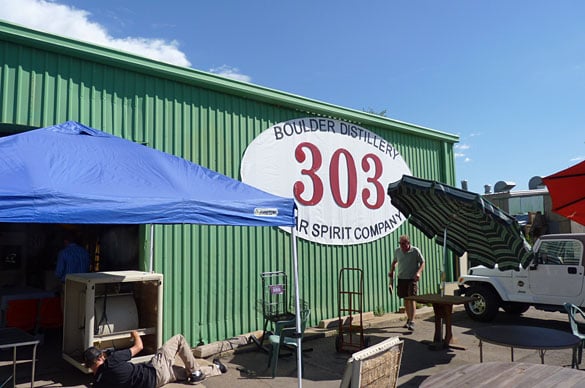 Their facility could not be less pretentious. Upon arriving at what I thought was the correct address I spied a green industrial building and wondered where I had gone awry but alas…it was the right time and I was at the right place! Tucked around the back of the building in a seemingly industrial type complex, I was greeted by a swarm of people prepping the place for their guests. 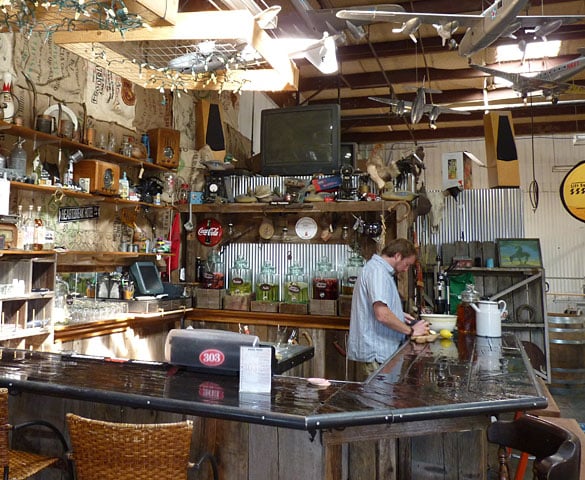 I was immediately struck by how warm and inviting this distillery is. The lack of pretense in their facility is more than just skin deep. While the guts of the operation are obvious on the right upon entering the front doors, the first impression is of the large wood bar where Rob is prepping for the anticipated crowd. 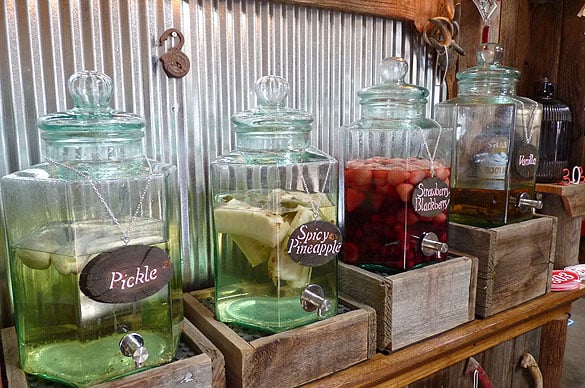 Without a doubt there is a very rustic ambiance; warm woods, assorted bar stools, large apothecary jars of infused vodkas and gin (yes, we sampled some of those) and an assortment of model airplanes, sparking white lights and rustic wooden doors that all complement the casual setting. 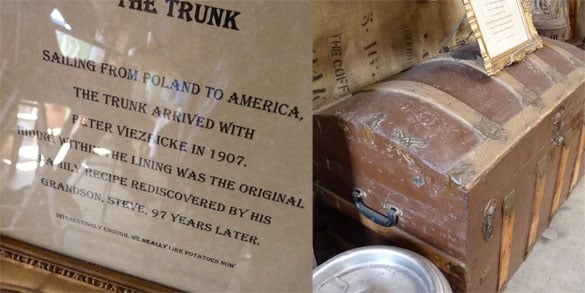 The owners of the 303 brand, which includes both vodka and whiskey are Steve and Terri Viezbicke. This steamer trunk traveled from Poland with Steve’s Grandfather and it contained the vodka recipe in Polish that they continue to use in their distilling today. It’s still a family affair, even if some of the employees are not blood relatives. Rob had worked previously for a different distiller; he shared with me that this wasn’t just another job; it really was like being part of the family.

We started the day at 10:30am so I politely declined a cocktail upon arriving. I settled in with a glass of water but within a few minutes the combined tease of seeing others with what looked liked a terrific Bloody Mary and the aroma of the assorted garnishes being dispensed right in front of me made me soon waver. This was the perfect morning cocktail offered by the owner Steve…really it would have been impolite to refuse, right? There is such care taken with every step of this libation, including securing their water for distilling from Indian Peaks in Ward, CO down to offering imbibers their choice of heat level in the finished cocktail. I chose the safe direction of medium and it was perfect for me. 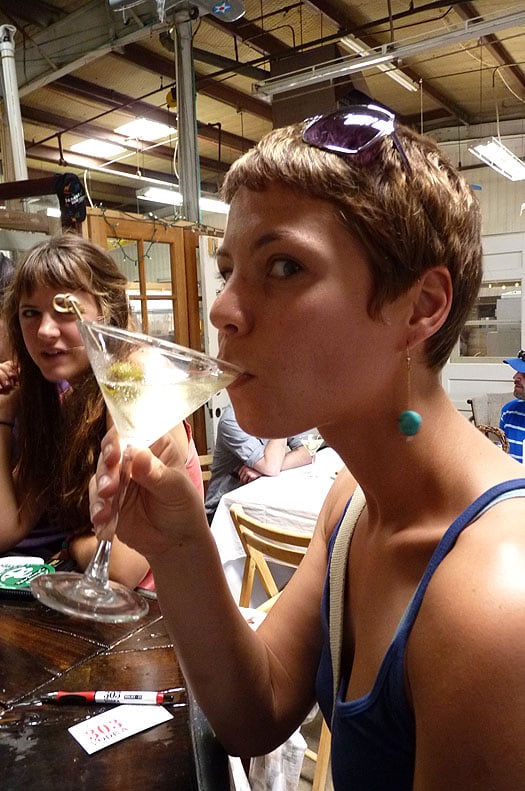 Hey boss…this is a tough job but someone’s gotta do it!

There is such an easy camaraderie between the owners and Rob, it’s clear that they enjoy working this operation together. Rob originally hails from Minnesota and it’s no surprise that a boy from the cold and lakes of that region found himself in the world of hockey, both in college and a pro stint with the Chicago Black Hawks. But this is now his passion and his mellow persona combined with his patience (he really was…I wanted to know details about the brewing that he has most certainly had to cite a million times over. Thanks Rob!) made for a most educational yet entertaining experience. 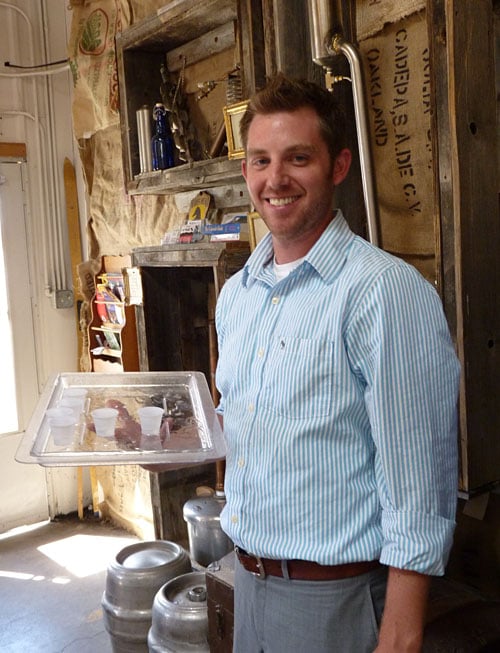 After other guests had arrived and we were spread out from the bar to assorted tables, it was time for a tasting and to learn more about the history of this facility. They’ve only been open for 3 years yet have built a steady reputation throughout this area and not just for great products but for great times too. They do have limited open hours for folks to come and have a cocktail so it’s always good to check first. The facility is available for events too and they recently hosted a wedding on the premises. If you are in the local retail business of beverages, whether a liquor store or a restaurant or bar, I’m sure that Rob would love to hear from you and extend an invitation to come visit. 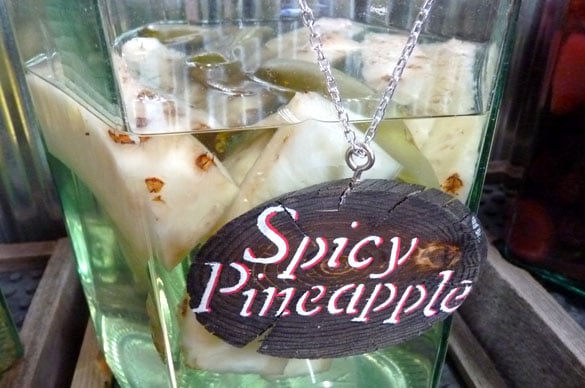 We were given samples of gin, vodka and beer to taste as well as some of their infused vodka offerings. Peanut Vodka? Yes…so subtle but so good too. The infused products vary with Vanilla Vodka being a constant participant but you never know what you may find in place of the Peanut, Mixed Berry, Pickle or Pineapple choices ready for consumption on this particular day. What really struck me was just how clean tasting their vodka and gin both were. Such clean clear flavor but also some very potent stuff. I was cautious and very ‘sippy’ that day; it was a fun respite from the norm but I did have to drive back to Denver! 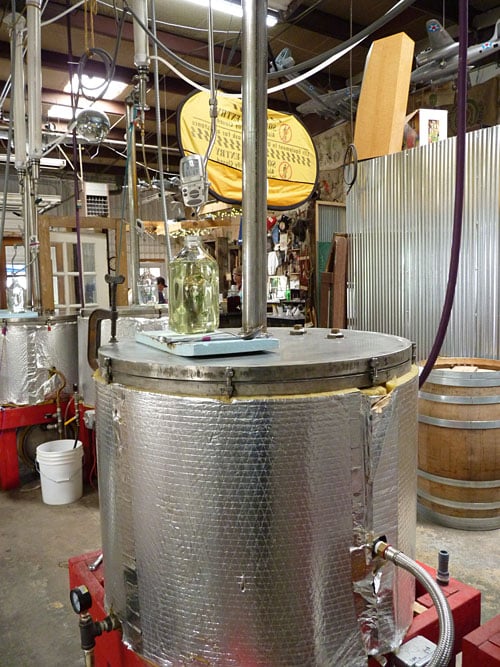 303Vodka is made with a determination that it clearly differentiates itself from other vodkas. Steve and Rob shared that vodka is typically distilled to be neutral, tasteless and odorless, not what they want to achieve with their efforts at all. We had a walk through the distillery and saw everything from the stacks of potato flour that start the process for vodka, whiskey and beer to the finishing drips of the ‘good stuff’ in glass containers sitting atop the stills. We were allowed to have a drop drip on our fingers to taste but at 95% ethanol it was a rush to get a taste to your tongue before the drop evaporated! 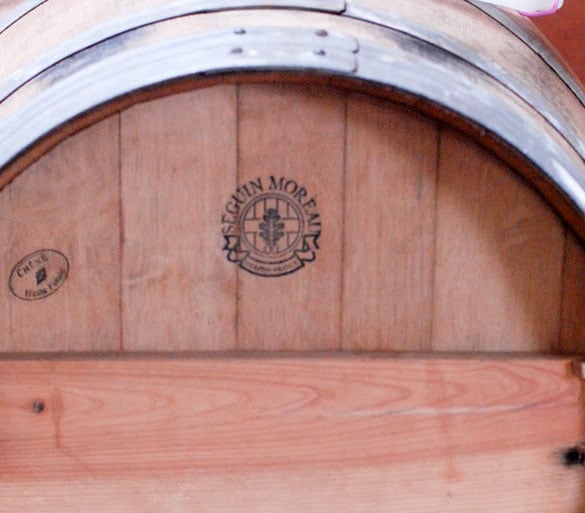 Being a self proscribed ‘wino’ I loved that the batches of potato whiskey they produce are aged for 3-6 months in used Cabernet Sauvignon wine barrels from a friend’s winery in Napa. Colorado weather predicates the length of time in the still; the warmer the temperature the sooner a batch is ready so more is produced in the summer than in winter months. The barrels are made of French wood that is toasted but not charred resulting in a whiskey with a very smooth finish on the end. 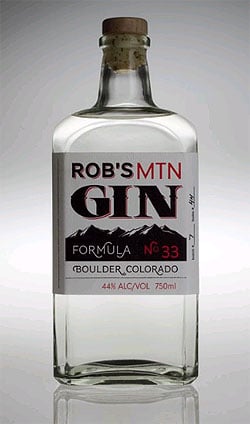 The last section of the distillery that we visited housed the works for Rob’s Mountain Gin. And where my camera’s memory card died…so I apologize for the lack of photos. A smaller operation than the vodka process but so different in other ways too. The gin distilling is a two part process. First it is distilled using a combination of Colorado and California juniper berries and the second time around the distilling includes a mixture of 7 different botanicals. I won’t give away the company secrets but suffice to say it was VERY interesting to see what constituted that blend! 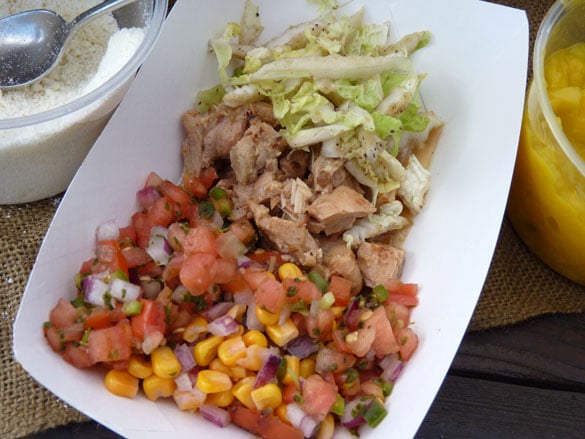 All in all, a most enjoyable visit and a trip I hope to make again. For our visit on this day, lunch was from Laau’s Taco shop at 1335 Broadway in Boulder. Good, fresh and perfect. And for dessert? Rob made one of their specialty drinks, the Vootbeer with Vodka, Rootbeer and Whipping Cream. For this girl who recalls many a summer moment spent at A&W I really enjoyed this adult beverage. It’s simple, cool and, well…sometimes isn’t that enough? 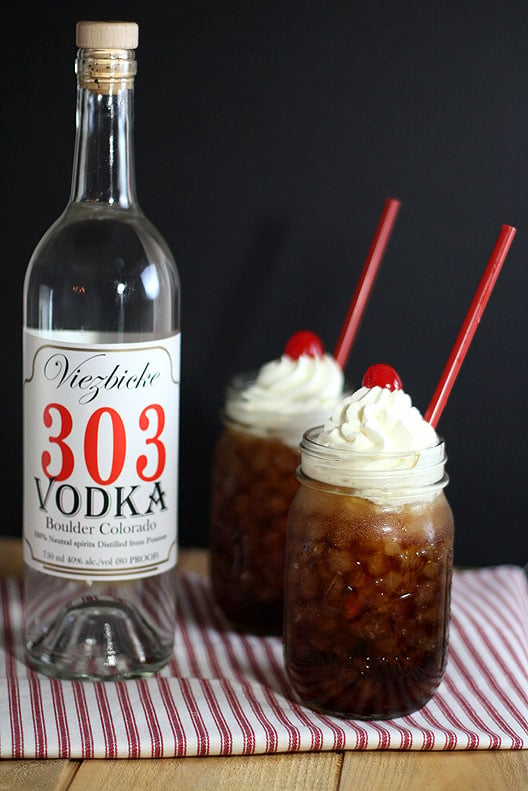 This article kicks off something I’ve wanted to get started for some time. I love making cocktails and appetizers and thought it would be fun to start creating a space where we could all find something if we’re hosting a party or even if just having something special for ourselves. So today is the beginning of Friday Cocktails. I’ll do a drink or appetizer each Friday and hope you will find this a fun resource too!

Happy Hour Friday, Vootbeer and a Visit to 303 Distillery

Reminiscent of a root beer float; this is most definitely an adult beverage!