For an easy summer treat, simply layer an ice cream cone crust with ice cream and fudge sauce and freeze. This Vanilla Bean and Strawberry Ice Cream Layered Dessert was wonderful but the choices are endless using your favorite flavor. 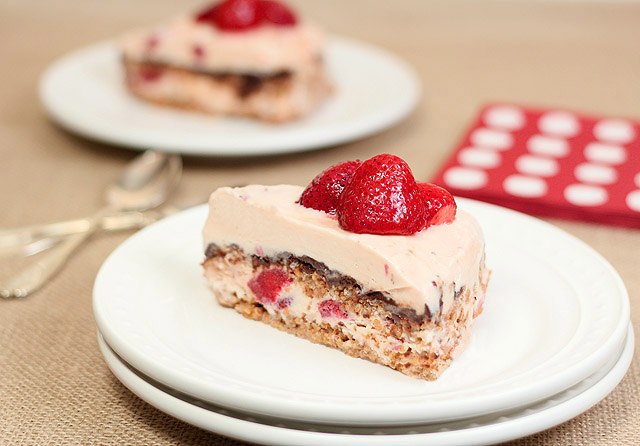 When I decided near the end of 2010 that I needed to find my own ‘food blogging’ tribe I was unsure what that would mean. It’s clear that some cities on both the east and west coasts have a plethora of people who write, photo and do all things food. Here in Denver I felt very much like what I would call ‘The Lone Stranger; so instead of lamenting what others had, I decided to start a Meetup group for local food bloggers.

Fast forward 18 months and  I’ve been blessed with making some real friendships with people that ‘get it.’ Our families might not, our friends don’t see what the big deal is but having a relationship with real friends who understand the joy, frustration and sometimes even confusion of the world of food blogging can make my day. We can commiserate when too tired to cook, exalt when for some reason we have a un-explainable traffic spike and in the best way, can be a part of the synergy I craved when I thought of starting a group.

As a group we were invited to visit the new Blue Bell Ice Cream facility in the Denver area which is just minutes from me in Centennial, CO. They are a distribution facility so all of the ice cream is still made and packaged in Texas and shipped here for distribution to local grocers. See that truck…there is a goldmine of ice cream in there! 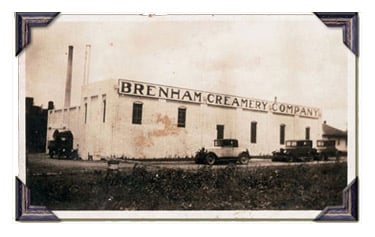 Blue Bell has a long history, starting in 1901 as the Brenham Creamery Company. First established to make butter from excess cream brought to them by local farmers, they would make small batches of ice cream for themselves but it was not a part of their product line.  It took a few years but eventually the creamery did decide to make ice cream for customers and would deliver it to neighbors by horse and wagon. In 1930 it was decided to change the name to Blue Bell Creameries, after the native Texas bluebell which grows as a wildflower. 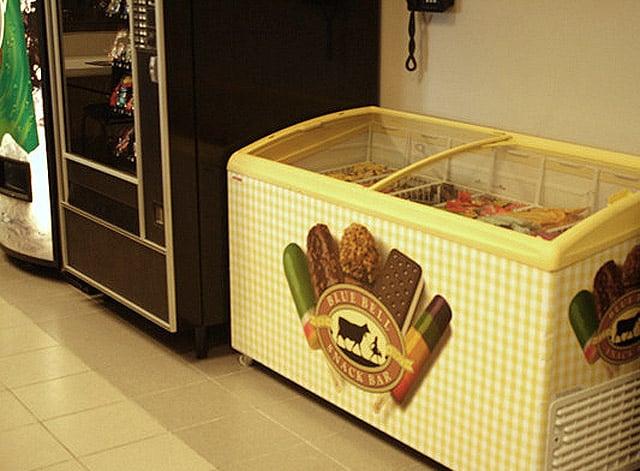 In keeping with their long tradition of making ice cream for employees, they keep a freezer of ice cream stocked for them in the break room. I just love their saying, “We eat all we can and sell the rest.’ That’s certainly a delicious part of working there; I’m filling out my application very soon! 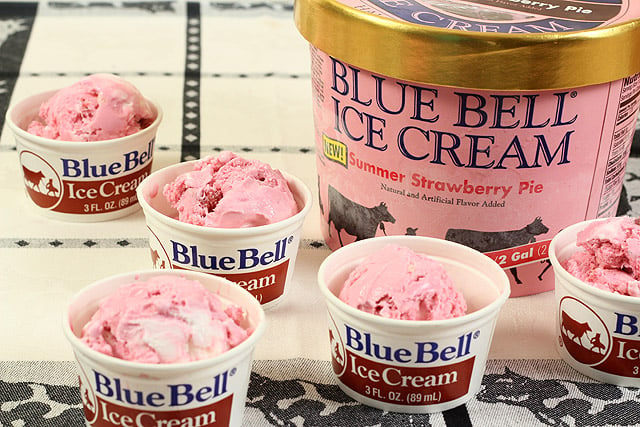 Blue Bell makes an extraordinary number of flavors; some year round and others seasonal. This month they have a new flavor, Summer Strawberry Pie which is a strawberry ice cream with sweetened strawberries, flaky pie crust pieces and a whipped topping swirl. Can you say YUM? This was just one of the flavors we were able to enjoy at home. I also had some Orange Swirl which I loved…it’s sort of a Creamsicle in a container as it’s orange sherbet and vanilla ice cream. 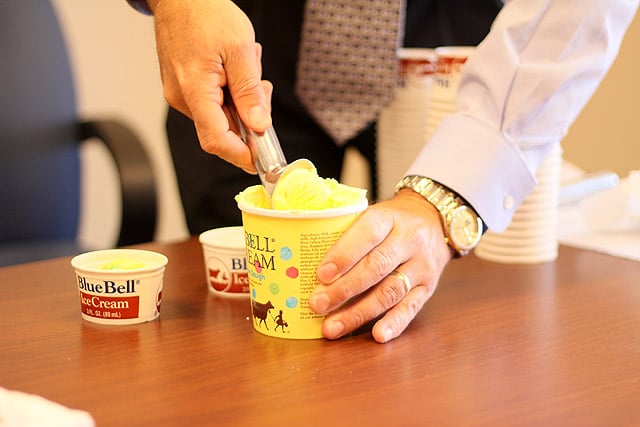 During our tasting, we were lavished with samples of ice creams available in their half gallon packaging (YES, a real half gallon!) as well as some of their Snack Products. Filled with enough ice cream I decided I could only try one bite from their Coconut Fruit Bars. Did I love those? Stuffed or not it would have taken every person in that room to have pried that baby from my hands. Not only did I finish it but admit I might have looked around for more. So fabulous! 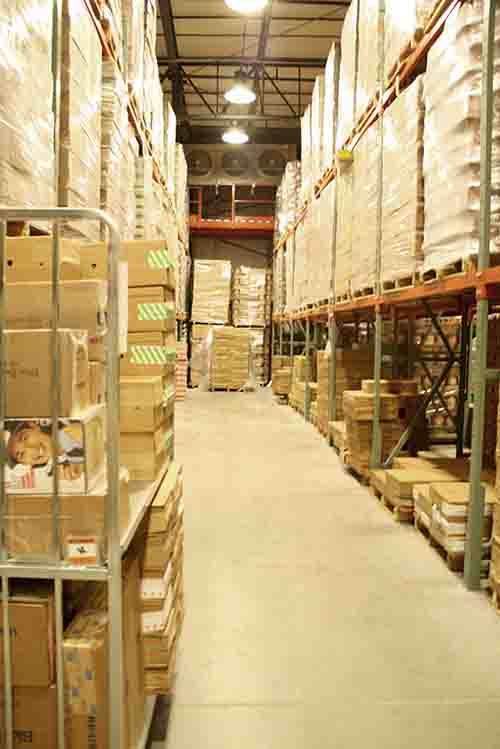 The day we went to visit was prior to the hellacious heat wave we had in Denver. The part of the facility where the ice cream is stored is kept at twenty degrees below zero. That would have felt so good compared to 107. Next time I hope they’re prepared; I’m coming over and I’m bringing a cot. Add to that respite from the heat the delicious ice cream as far as the eye can see? Heaven. 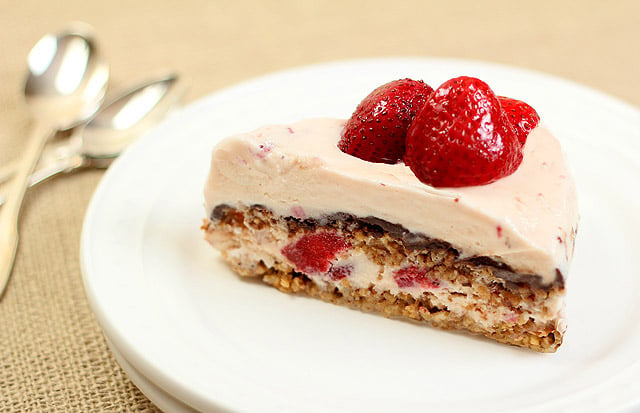 Anxious to try making an ice cream treat of some sort at home, we were provided with coupons so that we could choose what appealed to us the most. While I admit I love ice cream, I have a strong affinity towards Vanilla Bean so for me to even consider Vanilla Bean with Fresh Strawberries was a leap of faith. I decided to make a  dessert in a springform pan that began with a crumble made from ice cream sugar cones, butter, brown sugar and pecans. I layered the crumbs with ice cream and a rich fudge sauce, and topped it all with macerated fresh strawberries. I could tell you I ‘recipe developed’ for days putting this one together but the truth is I walked past those cones after buying the ice cream and it was a light bulb moment…how perfect would they be for the crumbs? The finished result was so good and so welcome on another overly warm day.

A vanilla and strawberry ice cream frozen dessert combined with a sugar cone crumble and a layer of rich fudge sauce.

For the Chocolate Layer:
For the Crust:
For the Ice Cream Dessert:

To Make the Chocolate Fudge Sauce:
To prepare the Ice Cream Dessert:
To Prepare the Strawberries for the Topping:

7.8.1.2
5767
https://creative-culinary.com/vanilla-strawberry-and-fudge-ice-cream-dessert/
Creative Culinary
Many thanks to Blue Bell’s District Manager Kevin McDermott for hosting us; it was fun to get to see the operation and now Blue Bell has a new Colorado fan! Blue Bell is available at most large grocery stores and Walmart in these states:

Disclaimer: We were provided with ice cream but were not required to or compensated for posting and all opinions are mine, all mine.