I’m not a huge fan of the ever popular PSL (Pumpkin Spice Latte) from Starbucks; way too sweet for me. But I like the idea of combining pumpkin pie spices with milk and coffee so I went a different direction. Forget a drink; these ‘Pumpkin Spice’ Latte Cupcakes with Caramel Sauce are so much better! 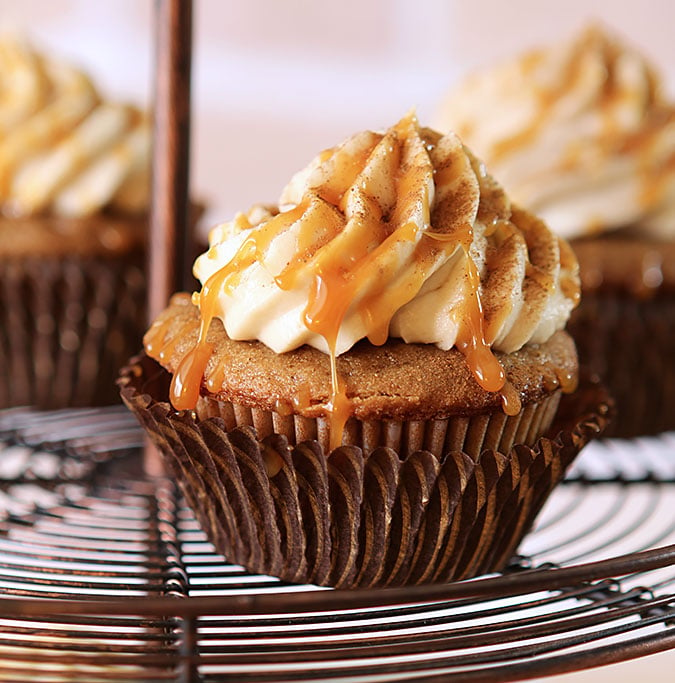 Once the pumpkin craze hits the Internet starting sometime in August (it’s still SUMMER for crying out loud!); I feel more inclined to hide than participate. Can I be honest? I just don’t get it. I admit, I enjoy the requisite pie on Thanksgiving but that pie had better have plenty of sugar and bourbon in it and a healthy dose of whipped cream (with more bourbon) on it. This year I’m thinking a creme brulee top with crumble on top of that. You know; to sort of disguise the fact that I’ve just made a pie from SQUASH!!

I’m all about the caramel and apple and more apple and maybe caramel AND apple and OK some dark rum or bourbon too. But waxing poetic about pumpkin is just genetically impossible for me. So in the same vein, I simply do not get the absolute devotion to this drink of which hordes line up for at the neighborhood Starbucks that is known as a ‘Pumpkin Spice’ Latte.

Or really sort of coffee drink and did you know there is absolutely no pumpkin but a lot of other stuff in it including caramel coloring! I won’t get into the nutritional (or lack thereof) components because my hypocrisy would be evident when you spot me in line for an Eggnog Latte. 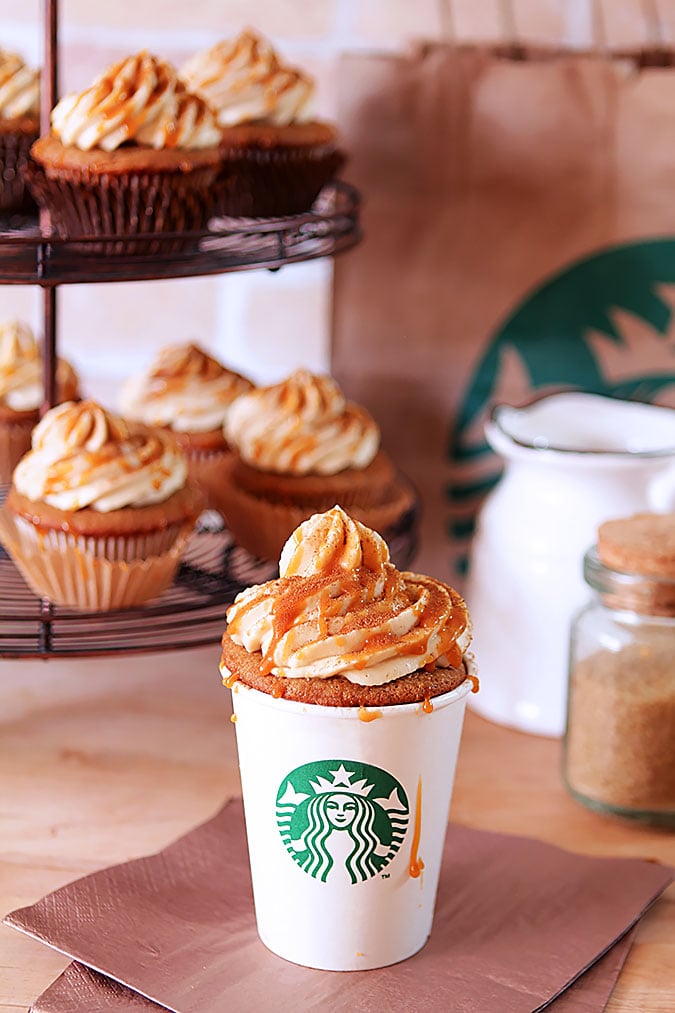 I thought it would be fun to showcase this creation in a Starbucks coffee cup but that was easier said than done. I didn’t want to bake them in the cups because I knew this cake recipe should make 24 cupcakes and that number would be halved with too much cake to frosting ratio so I just staged one by putting some foil in the bottom to rest the cupcake on. I have to admit, I love how it turned out.

The resulting Pumpkin Spice Latte Cupcakes with Caramel Sauce are sooooo good; not a pumpkin flavored cupcake but a coffee flavored cupcake with just a hint of spice. This was one of those times when the first go around was an abject failure. Wait – I take that back. Not a failure if you love spice cake (which I don’t) but I was looking for that coffee flavor to be prominent. As I experimented it was clear after my first test that to get what I wanted I not only had to cut back on the spices but also had to REALLY boost the coffee. And that was the key.

Not looking for mocha either, nope, no chocolate in sight. Just a real coffee flavored cake with a warming hint of seasonal spice. Oh and maybe a decadent mascarpone and whipped cream frosting with some more espresso too with a caramel drizzle for good measure. Now we’re talkin’ folks! 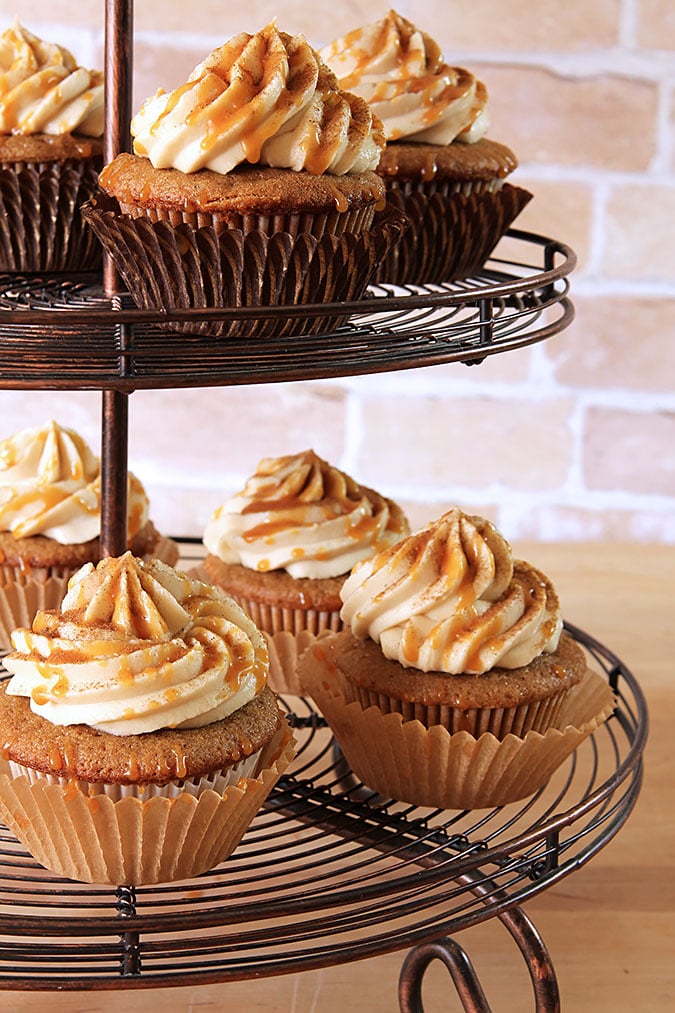 I actually did the frosting for these in two batches; one-half according to the recipe I’ve provided and the other half without the dried espresso. I sort of figured that parents of kids I gave them too would appreciate eliminating that extra boost of caffeine. These brothers; Tyler, Nolan and Mason are so cute. They always come visit together and when I answer the door; they ask, ‘Do you need any help?’ Why yes boys I need help sometimes with cookies and cupcakes. They are willing warriors in that effort. Love them! 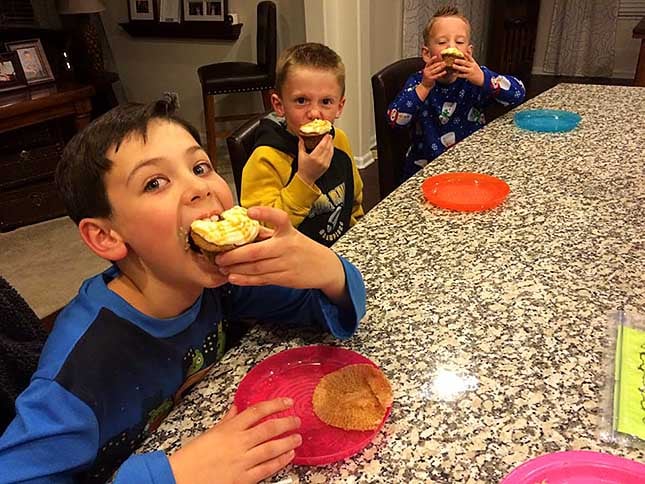 UPDATE: Apparently Starbucks has decided to add pumpkin to their mix starting in 2015. WHY? It will be interesting to see if fanatics still love it; for me I’ll still waiting for the Eggnog Latte!