You are here: Home / Meats / Chicken and Turkey / Chicken with Mashed Potatoes and Cheese Sauce

I’ve watched a couple of my friends participate in a unique monthly event called a Recipe Swap. Each month they are given a recipe to start from and their challenge is to ‘swap’ out some of the ingredients to make the end result their own personal and updated take on the original recipe. It sounded fun and creative and I loved seeing their results. That the recipes are from an old cookbook makes it even better; there is an element of simple charm that permeates this book that I really enjoy. 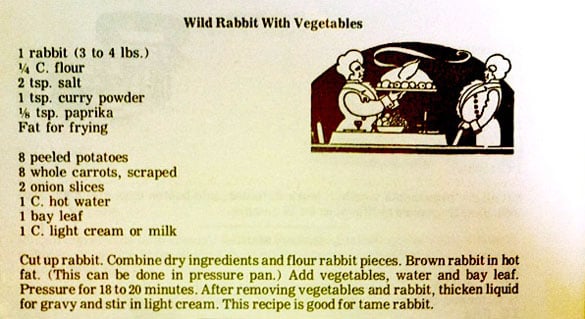 I’ve chatted with Christianna Burwell, she the instigator of this group and a few weeks ago we discussed my joining the group; it seemed so up my ‘I love to change up every recipe I do’ alley. The inspiration for the recipes that Christianna chooses come from an old cookbook that she found at the Tanque Verde Swap Meet. Titled All-Day Singin’ and Dinner on the Ground, it’s a hymnal and recipe book by Albert E. Brumley and the cookbook is still available for sale on the Brumley Music website.  The recipes evoke a simpler time and the need for the constant care of a dish; no digital thermometers or Thermidor ovens involved, when paying close care is how you knew a dish was complete. Christianna was inspired to start this project that nods to these recipes from the past and allows us to put our personal spin on them reflective of our own tastes and schedules.

This month the recipe that Christianna chose was for us was Wild Rabbit with Vegetables. Thankful that the whole point of this exercise was to swap out some ingredients and make something new; my first order of business was to ‘Welsh’ on using rabbit and use chicken thighs instead. Westley might have had something to do with that (forgive the blurry photo but try taking a photo of a bunny that never sat still!). 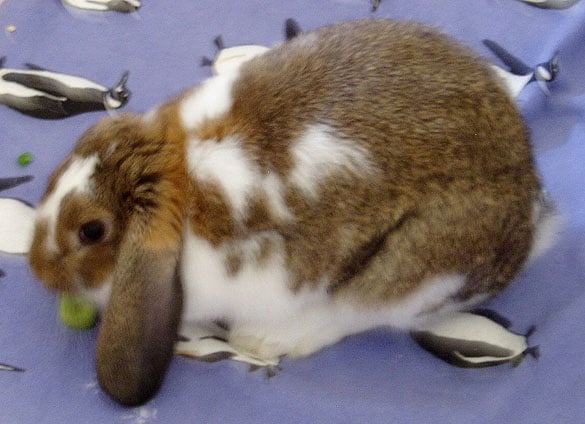 While the author of the recipe indicated it was good with tame rabbit, I seriously doubt they meant a rabbit named Westley who was my daughter’s pet, right? Who had a cage near the kitchen and roamed the kitchen and family room at will. Who anxiously waited for me early in the morning to sit and hand feed him his breakfast of carrots, spinach and other assorted vegetables. No, this was surely not the tame rabbit they meant and I could not bear the thought of eating rabbit any more than I could the thought of, well, let’s just say I have a dog I love too. 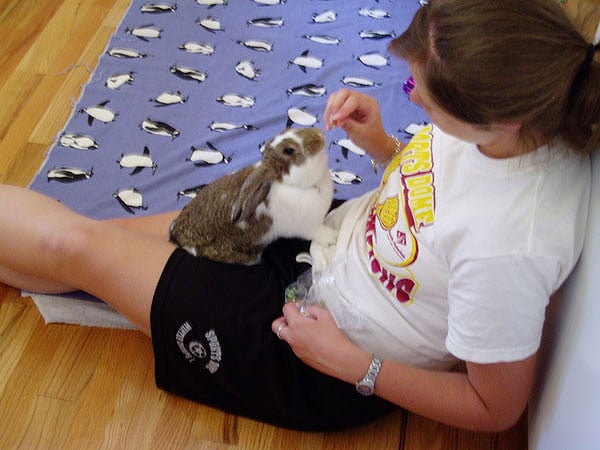 Though Westley went to live with a new family after my daughter went back to finish and graduate from college, I can never forget how cute he was. I wish I could find the photo of him wearing his hand crocheted cap; this little lop eared bunny was just too adorable and he left an indelible impression on my heart and as a result his cousins are safe from my knife forever! 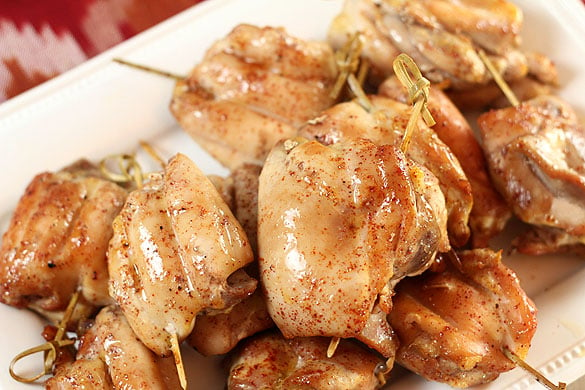 Wikipedia indicates that rabbit meat can be used in most ways chicken meat is used so I did a role reversal and decided to use boneless chicken thighs in lieu of rabbit. In fact, well-known chef Mark Bittman has said that domesticated rabbit tastes like chicken because both are blank palettes upon which any desired flavors can be layered.  I had yet to put together any sort of plan on what to prepare but what kept going through my mind was Welsh Rarebit, also called Welsh Rabbit even though there is nothing rare or rabbit about it. It is another very old recipe that consists of a cheese sauce poured over toast. And so it began…how could I make a dish with the proscribed ingredients, make a minimal number of substitutions while also including a Welsh Rarebit/Rabbit cheese sauce? 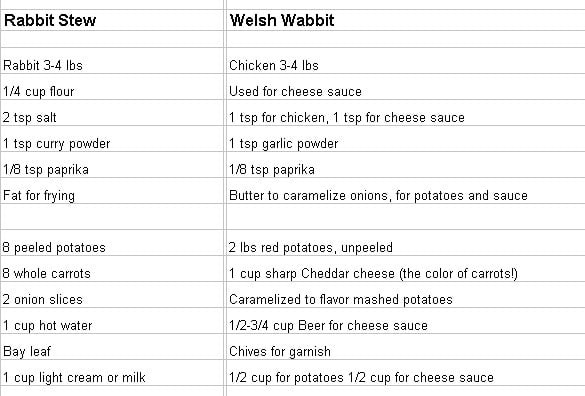 OK, maybe I didn’t have to be this specific but until I put those two columns into an Excel spreadsheet I found it easy to lose track of what I wanted to ‘swap’ and it helped me gain clarity on that task. I challenged myself to change as few ingredients as possible and yet come up with something entirely unique. If you notice there is not much salt; I had 2 teaspoons total to use for the meat, mashed potatoes and cheese sauce. I ended up using it for the chicken and potatoes. I mean, potatoes with ANY salt? Couldn’t do it!! 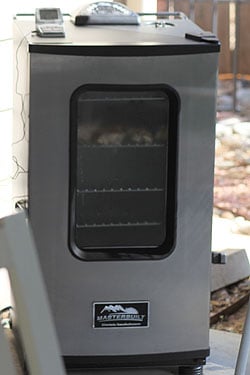 Keeping seasoning to a minimum in the potatoes called for me to get creative and why I chose to caramelize the onions in butter and add that to the potatoes…that enhanced their flavor dramatically and when combined with the other components of this dish, no extra seasoning was required. There is a lesson there…I would have never thought that 2 tsp of salt would be enough for this dish that can serve 8 people!

Know what else made a huge difference? This amazing little thing I just got Friday. It’s a digital electric smoker from the folks at Masterbuilt and that’s another story in itself that I’ll share with you soon but I do know this…I should have had one of these a LONG time ago. Minimally seasoned chicken thighs came out tasting like pure Heaven. If you can’t smoke  your meat and decide to make this recipe I’m sure it will be fine from the grill but I have to tell you…smoke it if  you can. The combination of smoked chicken, cheddar cheese with beer and mashed potatoes was, as is popular to say…To. Die. For. 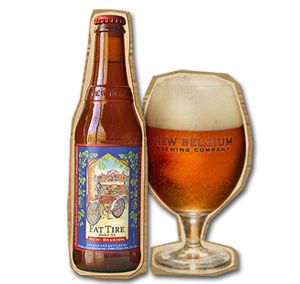 I pondered what I had to use; what I could revise and still keep to a dish that represented the ‘spirit’ of the original and went to town. A layered dish of mashed potatoes flavored with caramelized onions, butter and milk; topped with smoked chicken seasoned simply with salt, garlic powder and paprika and finished with a Cheddar Cheese sauce flavored with Fat Tire Ale, a pale ale from the New Belgium Brewing Company. Was it a prophetic or pathetic reach that I felt this was the perfect brew since my time with Westley was as the result of my daughter going back to Colorado State University in Fort Collins, CO which is the home of New Belgium? No matter, might be both! 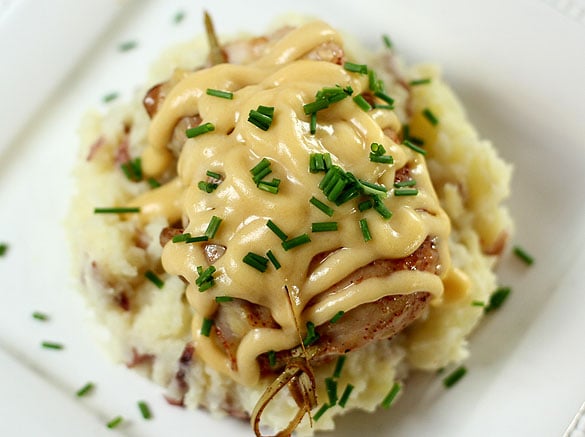 Chicken with Potatoes and Cheese Sauce

Smoked Chicken is served over smashed potatoes and finished with a beer/cheese sauce.