This Beer, Butter and Garlic Chicken Basting Sauce is almost too simple to be so good; a blend of garlic, butter, and beer that is slathered on while grilling. Easy and delicious!

I know…there should be a cocktail today but I’m running late; so much going on and I made this and wanted to share it instead! I’m having a barbecue here tomorrow and spent yesterday canning half a dozen pints of Bourbon Peach Jam with Vanilla Bean and grilling a bunch of chicken with this Beer, Butter and Garlic Chicken Basting Sauce.

I should have shared this a long time ago; why I did not is sort of beyond me. Maybe because the only record I have of it is on a small 3″X5″ recipe card and it was waylaid in stuff? I was thrilled to happen upon it and decided it was time to get it on my blog so I don’t lose it again! This is a very special sauce. Which is why that little recipe card labels it as Ila’s Barbecue Chicken Basting Sauce.

Yes there is a story and it’s about one Ila Jean Newell. My hero. I met Ila when I was a young mom and was going through a real struggle. I had been a stay at home mom for several years and had two young children, ages 2 and 6. My husband had begged me to leave our wonderful home and my best friends in North Carolina to move to Denver for a job opportunity he felt would be life changing for him.

I agreed, but my plans and his differed! Seems his girlfriend followed shortly thereafter and their evil plan unveiled itself when he notified me one Saturday morning that he was leaving. I thought to the grocery store but no, he meant something totally different! I had to recover quickly and set some wheels in motion to reclaim my life and take care of my kids. I was juggling a million balls when I started to have some health problems.

In short order, I ruptured a disk in my back, had kidney stones that left a stone stuck in my left kidney and had an overactive parathyroid gland that was the culprit as it was sending way too much calcium into my body. So…here I was, bedridden for 6 weeks initially trying to get my back to behave and ultimately after three surgeries; one every six weeks, just trying to recuperate and raise two little girls by myself.

I had met enough people that jumped in to help with the kids but my saving grace was that doorbell ring that I actually cursed the day I heard it. Didn’t everyone know how hard it was for me to get to the door?? But I made it and when I opened the door there was a woman I had never met. She introduced herself to me and said, ‘Hi, I’m Ila Jean Newell and my husband and I just moved in a couple of doors down. I understand you could use some help.’ I get a bit weepy still just remembering. 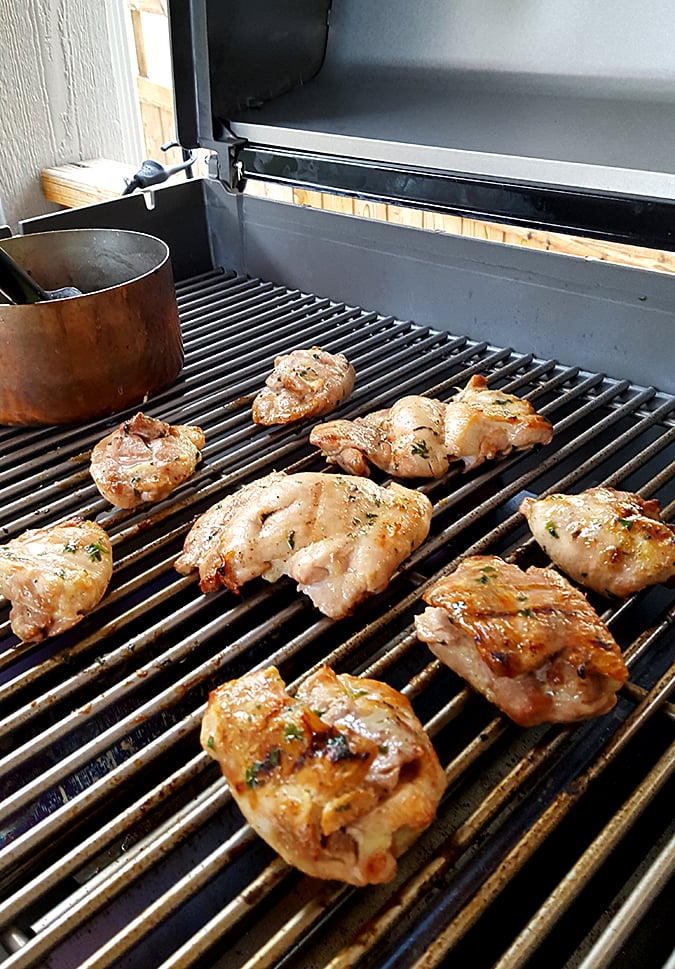 Ila was about 15 years older than me and she and Lee had never had children but she still loved kids; was very close to her nieces and nephews and she certainly grew to love mine. She became my angel. My friends didn’t have to come get the girls ready in the morning anymore as Ila walked over to do that; what a relief that was.

While Emily and Lauren would still go home from school with different friends and have dinner before they brought them home, having someone just two doors away was a lifesaver for me and getting them bathed and to bed was much easier. I will never, ever forget the kindness she and Lee showed me, someone who was a complete stranger.

Ila was a terrific cook too and often brought me dinner and eventually, on the weekends that their father came to ‘visit’ the girls and I was on the mend, I would often join them at their house. She made an amazing Osso Bucco and steaks on the grill but the one recipe I had to have was this one for Beer, Butter and Garlic Chicken Basting Sauce.

Of course we did not remain strangers; we became very close. She was sort of a surrogate mom to me, since my mother was long gone and I was that daughter she never had. We were (and are) still so much alike. Both stubborn and determined to do it ourselves, she was a huge source of inspiration for me as I had to take on the role of mom and dad in our household.

I will never forget the red toolbox she gave me for Christmas that year with a hammer and set of screwdrivers in it and I still have it. When I moved in 2014 and couldn’t find it and I was verklempt…locating it a couple of months ago honestly made me cry…it’s a box filled with all my manly man tools, yes, but it’s also still got those smiley face stickers that Ila put on it all those many years ago. I do smile each time I see it! 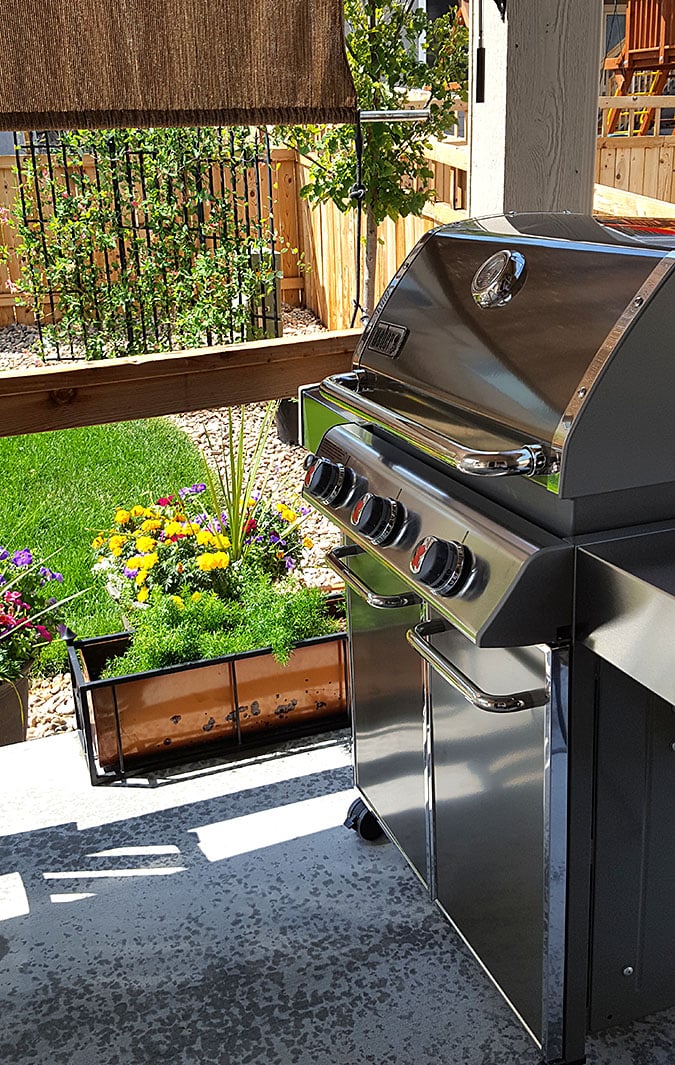 I credit both Lee and Ila with getting me into grilling too. They used their grill then as much as I use mine now. I gave myself a treat and bought a new Weber Grill three years ago…don’t I wish it still looked this perfect!

Amazing how much has changed in that photo; I need an update but still, what better way to christen it than with chicken slathered with Ila’s Barbecue Chicken Basting Sauce and that’s the first thing I made then. I love that each time I use this sauce for grilled chicken that I take a walk through memory lane of those years when Ila and I were neighbors.

It’s a simple recipe really…some beer, some butter, some garlic. But it’s perfect. It’s thinned with a fair amount of water so it is really slathered on throughout the cooking time and flareups on the grill are pretty much a non event due to the lessened fat content of the sauce as it is grilling. I even go so far as to just dip the entire piece in the pan every couple of minutes and it works! 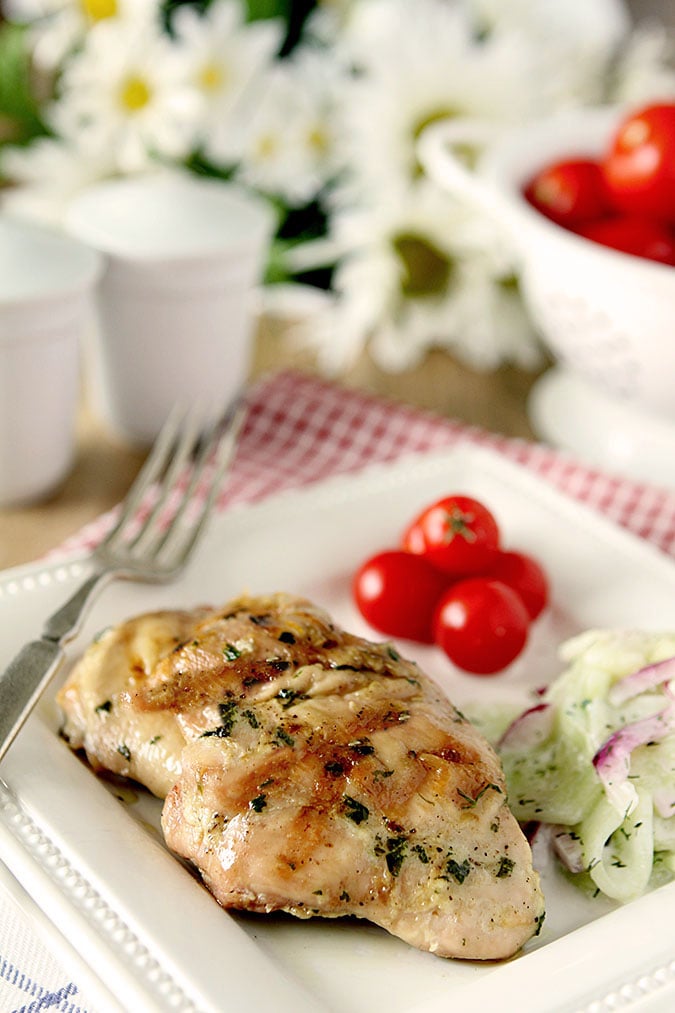 I’m so glad I found that recipe card for this Beer, Butter and Garlic Chicken Basting Sauce . Not only do I love this simple recipe but every bite is a treasured memory of someone I really love; thanks Ila Jean…you truly are the BEST!

More of My Favorite Chicken Recipes!